You are at:Home»Current in Zionsville»Black and white quilts on display at SullivanMunce Cultural Center 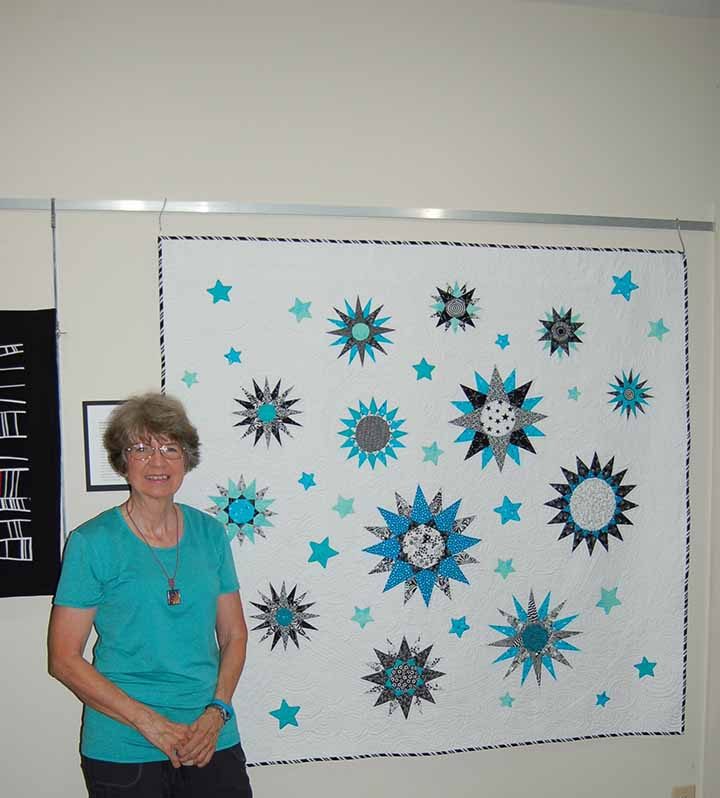 The theme for the free exhibit, Black, White and More, was voted upon by the 11-member Charm Club and “was a challenge that we hadn’t done before,” said Charm Club member Judy Pleiss. All of the quilts are made using black and white fabric with one accent color.

The Charm Club initially met at SullivanMunce approximately 30 years ago after being interviewed for an article about quilts. The ladies who lived all over Indianapolis decided to make a charm quilt, in which no fabric is repeated. That gave the group the inspiration for its name, and it soon had its first exhibit featuring charm quilts at SullivanMunce.

Pleiss’ black and white quilt is a Mariner’s Compass block, a complex-pieced quilt block that she had decided never to try because it was too complicated.

“I thought, ‘I am never going to cut all those little pieces out,” she said, until a ruler was created to make the process easier. As a result, her quilt, inspired by Van Gogh’s Starry Night, is titled “Never say never.”

“Not all quilts are made for the bed anymore,” she said, “They’re made as pieces of art.”

Pleiss has two additional quilts on display that were inspired by artifacts in the Mathers Museum of World Cultures collection in Bloomington. Several of the women who created these additional pieces had their quilts displayed at that museum in February along with the artifact that inspired it.

Also on display are quilts by the Show Girls, so named because they all attend an annual quilting show in Houston. Despite living in different states, the Show Girls send similarly colored pieces of fabric to one another to use in their quilts, resulting in a collection that includes everyone’s fabric.