Seth Voegele was able to shake off a case of the nerves. 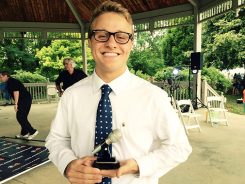 “When I went up to sing my last song, I could feel my heart beating,” Voegele said.

Nonetheless, Voegele, 19, was able to capture the 18-and-over division in the CarmelFest Has Talent singing finals July 4 on the Gazebo Stage. Voegele was joined by two Westfield winners, Reilly Spiller, the 13-17 division and Keegan Connor, the 12-and-under division. The five-semifinalists lineup was trimmed to three after July 3 performances.

Voegele, whose father lives in Noblesville, graduated from Lapel High School and will be a Purdue sophomore next month.

“My dad and my sister pushed me into the competition and it had a pretty good outcome,” Voegele said.

This was the first talent competition for Voegele, who sang in Lapel’s show choir.

“After doing this one and having this success, I might consider doing other competitions,” Voegele said. “I might see if I can sing at Purdue.”

Voegele sank “A Foggy Day,” which has been covered by Michael Buble.

Spiller, who will be a Westfield High School junior, sang “House of Gold” by 21 Pilots. The 16-year-old likes to sing alternative rock songs.

“It was so much fun and I’m really glad I did it,” Spiller said. “I was a little nervous. It was my first competition.”

When she entered, Spiller said she didn’t have any expectations of winning.

“I just wanted to try it and have fun,” she said.

Keegan Connor, 9, will be a Westfield School Intermediate fifth grader in the fall.

“It was such a fun experience,” said Connor, who had performed in school and Christian Youth Theater talent shows.

Connor sank “Fly to Your Heart” by Selena Gomez in the final.

“I was pretty confident in myself,” Connor said.