You are at:Home»Current in Zionsville»New fire truck a workhorse 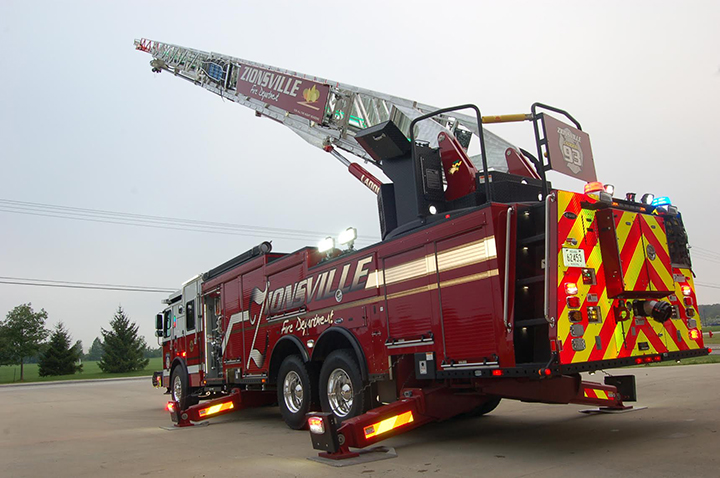 “Not only does it meet our daily needs but is a balance of industry standards,” said ZFD Deputy Chief Brian Miller.

The 137-foot ladder is reported to be the tallest aerial in service in North America, but more importantly, for the needs of the ZFD, it reaches 126 feet to the side. Because many Zionsville homes are set back more than 60 feet from the curb additional length is needed for the combination of vertical and horizontal reach so that firefighters can get to roofs to more effectively fight fires.

“Our biggest concern, and one of the things we want to make sure we’re able to do, is reach those properties that are commercial or residential,” Miller said.

The ladder is mounted at the end of the truck instead of the middle of the body, where most ladders are located, allowing a 360-degree reach and better maneuverability. The quint will replace a 95-foot ladder truck that has been retired due to age.

The truck has a 500-gallon tank, storage for EMS and tools for light extrication, should someone become trapped at an auto accident. “It’s more than a truck with a big ladder on it,” Miller said.

It took two years to complete, starting with a ZFD committee specifying the ergonomics and organization of the truck and other details such as green lights up the ladder, multiple Zionsville logos, and remembrances of firefighter-paramedic Cody Richardson, who died in 2013.

The truck will be ceremonially pushed by firefighters into the station during a special public dedication ceremony at 5 p.m. July 13 at Station 93.