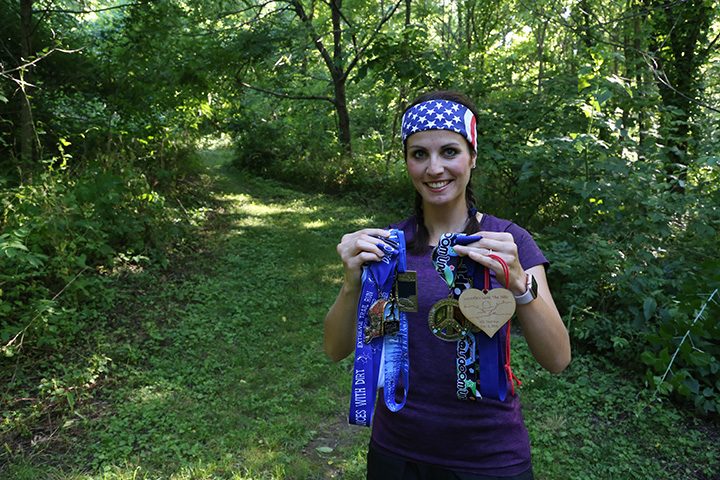 Stefanie Sharp displays medals she has accumulated during the past four years. (Photo by Ann Marie Shambaugh)

Four years ago, Stefanie Sharp was lacing up her shoes to compete in her first road race, CarmelFest’s 4.5-mile Freedom Run.

She completed the race respectably in the middle of the pack, but crossing the finish line sparked a passion for pushing her limits. This holiday weekend, she’s signed up to run a 100K race in her hometown of Fröttstädt, Germany.

“It’s one thing I want to accomplish, and I see that as my final destination in ultra running, if you ask today,” Stefanie said. “If you ask me after the 100K, I might be up to 100 miles by then.”

Stefanie’s running partners have been amazed and inspired by her progress in such a short time.

“She was just doing her first marathon a couple of years ago, and when she started she just hasn’t stopped. She’s just blown everybody away,” said Rana Kory, a friend and running partner from Carmel. “She’s done more ultras than probably anybody I know.” 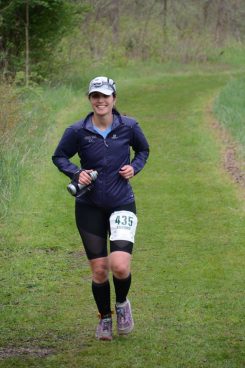 Sharp, 32, has found her stride in Carmel, where she’s lived for the past seven years. But her life looked much different a decade ago as she wrapped up her studies in the financial industry in her native Germany.

She grew up in a town of 420 people between Frankfurt and Berlin, born into socialist East Germany. Members of her family lived in the West Germany, but because of the political divide, she didn’t know them well.

That connection, however, was enough to change the course of her life. Her mother had remained close with a relative whose son was attending college at Purdue University. When they heard that his American friend was looking for a German pen pal, Stefanie was intrigued.

“I was totally blown away by the fact that he spoke English,” Stefanie said. “I was never exposed to any international people, and I found (the language) really fascinating.”

Stefanie’s new pen pal, Scott Sharp, was a pilot who had previously lived in Germany, and soon he traveled there once again so they could meet. They officially began a long distance dating relationship, trekking across the Atlantic Ocean every two weeks to see each other. They married in Germany in 2008 and moved to Carmel in 2009.

Stefanie got a job at the National Bank of Indianapolis, where she had the opportunity to improve her English and begin networking with people from the area. One year later, she accepted a new challenge in the human resources department, where she enjoys working with people and encouraging them in one of her new passions: health and wellness.

It wasn’t until after Stefanie moved to Carmel she decided she wanted to improve her health. When she gave running a try, she admittedly hated it at first.

But after finishing her first race, she decided to keep pushing herself, seeing how far she could go. She completed a half marathon, a marathon, a 50K trail ultra-marathon and a 50-mile race.

Scott, a 2001 Carmel High School graduate, said he was surprised when Stefanie decided to become an ultra-distance runner, but quickly discovered that she was a natural.

“She may not even sweat,” he said of her three-hour, warm-up jogs.

Stefanie trains for her races all over central Indiana. Some of her favorite trails are in Eagle Creek Park, Fort Harrison State Park, Cool Creek Park, along the Monon Trail and on the trail system behind Northview Church.

As Stefanie has become a rising star in the ultra running community, her friends say her spirit of humility and compassion outshines anything else on her impressive resume.

“She is so much faster than I am, but she was nice enough that she slowed her pace down to stay with me and got me through that race,” said Darrell Brumfield, a friend who recently joined her at the Dances with Dirt race in Gnaw Bone, Ind. “That’s just the kind of person she is. She gave up her competitiveness to help me get through that and help me finish.”

Stefanie isn’t sure how far she runs a week, because to her the point isn’t to rack up mileage.

“For me, it’s about fun,” she said. “My running motto is ‘Run long, run often, but never outrun your joy of running.” 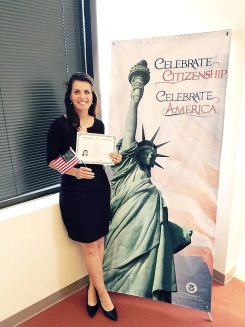 Stefanie Sharp became a U.S. citizen on May 19. (Submitted photo)

As Stefanie Sharp has been furiously marking off athletic accomplishments, she recently checked another goal off her list when she became a U.S. citizen May 19.

She said she has always felt welcome in her new country, feeling pride when hearing the national anthem long before she became a citizen.

“I am so proud to represent the U.S.,” said Stefanie, who also maintains her German citizenship. “It was a natural development in my personal history, and it makes me feel so much closer to America.”

After the ceremony, Stefanie celebrated with “good German food” and returned to an office decorated in American flags.