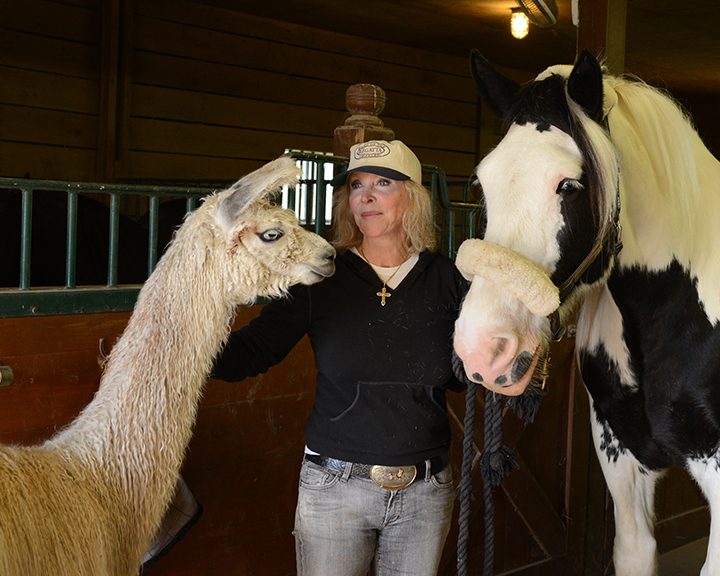 Nancy Noel pauses with two of her animals at her Zionsville farm. (Photo by Theresa Skutt)

The downy feathers of an emu, the warm nuzzle from a llama, and the clucks and crows from a pair of roosters meld together to create a lovely experience for which sight is unnecessary.

Middle school students from the Indiana School for the Blind and Visually Impaired were the latest guests at Nancy Noel’s farm, meeting her therapy animals that include a horse, an emu, two roosters, a dog, a pig and multiple llamas.

Noel, best known for her artwork, began sharing her llamas with nursing homes and children’s hospitals more than 15 years ago. 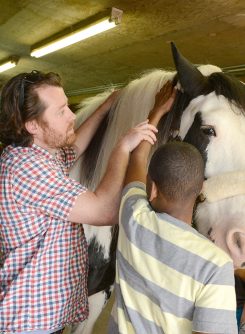 “My llamas have always been therapy animals,” she said, although she doesn’t do anything exceptional to condition them.

“Honestly we love them, we pay attention to what they feel psychologically, what they need, we don’t confine them, we don’t punish,” Noel said. “They all just turn out like this.”

“When we pay attention to (what they want), then they’re just different animals,” she said. Sisters Jane Brown and Karen Elliott work with the llamas to acclimate them to people and social situations.

As the 32 students exited the bus, they were greeted by a Great Dane named Degas, and Luna, a llama rescued by Noel more than a year ago after being abandoned by her mother. Luna lives indoors and has learned a lot from “parental figure” Degas, according to Pierle. Cricket the emu, rescued by Noel a few months ago, has also attached herself to Degas, learning social skills and adapting to humans.

“My favorite so far is the rooster,” student Gordon Wilson said. “It has more than one animal’s feature,” he said, noting the rooster seemed to have elements from a condor and turkey with the iridescence of a peacock’s tail.

Even while chatting with the students, Noel was continually scanning the area ensuring the comfort of her guests.

“She’s got her eye on everything right now,” Pierle said. “She makes sure kids are safe, animals are safe.”

“My responsibility is the children’s welfare, and then the animals’ welfare,” said Noel, observing two- and four-legged creatures interact.

Students learned about the animals’ diet and asked where the animals liked to be petted, whether the emu could fly and the ages of all of the animals.

Noel has invited organizations to her farm in the past, starting with Brooke’s Place.

“Nancy loves to open the farm to people that might not otherwise have the opportunity,” Pierle said.

“A lot of these students, being blind and visually impaired, it’s a neat experience anytime they get to interact with animals and pet and smell and use all their senses,” said Josh Baxter, a middle school teacher at ISBVI.

“It’s a great opportunity for them to get out and experience something they don’t encounter in a typical day,” he said. “It’s nice to see them smile and have a good time.”

Students from ISBVI have visited several times before, but this was the first opportunity for the younger students to attend. Baxter heard about the previous visits and thought it would be a great opportunity for his students.

With the animals roaming free, the children were able to rotate among them spending as much or as little time as they’d like with each one.

“Dogs have been my favorite animal ever since I was little,” eighth-grader Sarah VanPatten said. The cancer survivor declared she’d found a new boyfriend in Great Dane Degas, finding many opportunities to pet him. “I want to take him home,” she said.

“All those little incidental things that they don’t get to learn in their school lives, in this outside type world,” said orientation and mobility instructor Kristen Pierski. “It’s important for them to know that these types of things exist, like an emu.”

Amidst a student’s tears that the time was at an end, many others bid farewell to their favorite animals.

“These kind of things always teach me, so I’m happy to do this,” Noel said. 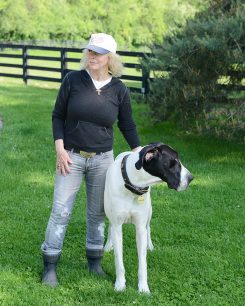 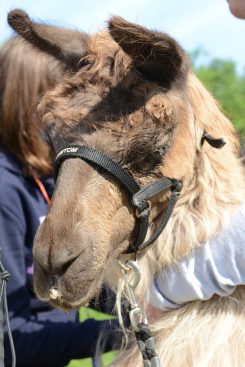 “All are worthy of interacting with the kids but certain ones are chosen over others,” said Noel of the blind llama who is one of 12 on the property. 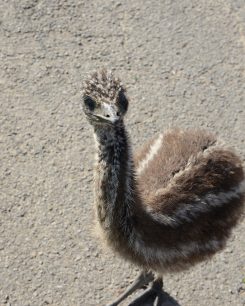 Cricket was rescued by Noel at a few weeks old and has been raised in the house along side Degas and llama Luna. “She is the funniest animal that i have ever had,” said Noel. “Her energy raises to the level of whatever is going on at the moment.” 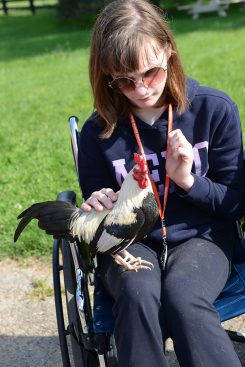 A child wouldn’t smile during his visit until the rooster hopped on the table. “He totally came out of his shell, beyond happy,” Noel said. “Roosters love to be held, they love to sit on you.” 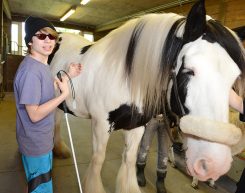 The Drum horse weighs 2000 pounds and 17-18 hands high but “she knows when the kids are here she acts a certain way,” said Noel. 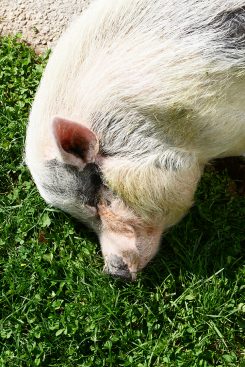 “She changes her attitude as soon as children come around,” said Noel.