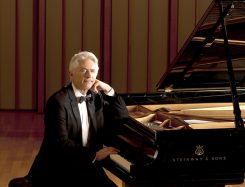 Jazz pianist David Benoit has been working for “Peanuts” for years and loves it.

Benoit has performed solo piano music for “Peanuts” TV specials for more than 20 years. Benoit recorded nearly all the piano solos for “The Peanuts Movie” in 2015.

Benoit said The Warehouse’s listening room-style should be a good fit.

“I like the intimate style where everyone is close by,” he said. “I have a series of evergreen songs that I’ve written and have gotten a lot of radio play over the years and people expect to hear, like ‘Kei’s Song,’ ‘Freedom at Midnight’ and ‘Watermelon Man.’ I like to pay tribute to some of my jazz musician heroes like Dave Brubeck, Bill Evans, Herbie Hancock and Vince Guaraldi. I think people know they are going to hear the ‘Peanuts’ theme, and then maybe a few things from my new album as well.”

Guaraldi wrote “Linus and Lucy,” which is recognized as the “Peanuts” theme.

Benoit, 62, credits watching “A Charlie Brown Christmas” as a teenager for making him realize he wanted to play like Guaraldi, who died in 1976.

Benoit joked that when all else fails he can play his “Peanuts” music.

“That’s usually what they’re waiting for,” Benoit said. “We have a lot of fun with it. I play it like it’s the first time I’ve ever played. The audience enjoys it and is always enthusiastic.”

Benoit said he typically does a Christmas tour each year, based on the Charlie Brown music.

Benoit, who has recorded 25 albums and is music director for Asian Symphony Orchestra, has been nominated for a Grammy five times.