You are at:Home»Current in Carmel»Carmel Community»National Train Show expected to bring crowds to Mr. Muffin’s Trains 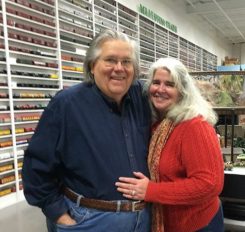 The National Train Show is coming to Indianapolis July 3 to 10, and Mr. Muffin’s Trains in Carmel will be a featured stop on the tour for enthusiasts and collectors.

The shop on Carmel Drive has been a hit with model train lovers since it opened in November 2013. Owner Steven Nelson said some locals bring their children every Saturday, and others come from all over the state to see his model trains and enjoy fresh-baked muffins made by his wife, Liz.

The train show is expected to bring in a lot of extra traffic to the shop.

“I’m sure we’ll be slammed that week,” Nelson said.

The National Train Show is put on by the National Model Railroad Associaton and holds its convention in a different city each year. Nelson said he remembers taking his children to the event when they were young, and he is excited the show will be in his home city.

“They are very excited to see our layout,” Nelson said. “We have one of the largest public layouts in the country.”

Having such an expansive layout means a lot of preparation and work for Nelson’s crew. His wife will touch up on the scenery and bake muffins. His son will help with testing the trains and servicing all the engines, and Nelson will de-clutter so that visitors can have plenty of room to admire the 40,000-plus trains in his collection.

Nelson said his store is like his other home, and he feels that his trains are like children, in a way.

“I’ll have to be back there to watch them,” he said. “Make sure they behave.”

The National Train Show may be primarily for train enthusiasts, but anyone is welcome to stop by Mr. Muffins’ Trains.

“For us, it’s all about introducing the hobby to families,” Nelson said.