You are at:Home»Current in Geist»Have a blast!: Area events ready to celebrate Fourth of July in style 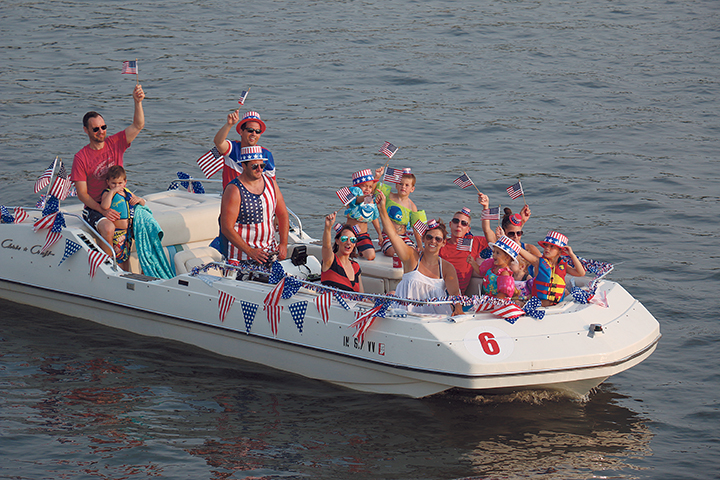 Event officials expect between 12,000 and 15,000 residents to descend on the Fall Creek Road bridge over Geist Reservoir for Blast on the Bridge. (File photo)

This year’s Fourth of July holiday weekend offers Geist area residents plenty of opportunities to get out and celebrate America’s Independence Day with local traditions both old and new. 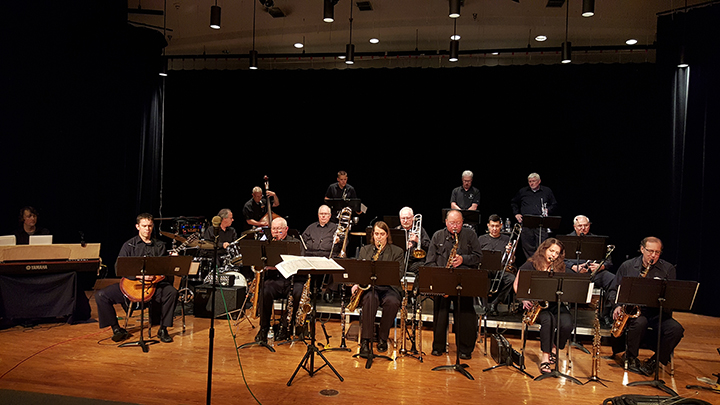 The Heartland Big Band, pictured during a previous performance at the Theater at the Fort, will perform there at 7 p.m. July 1 as part of the City of Lawrence’s Fourth of July weekend kickoff. (Submitted photo)

A new tradition will begin in Lawrence and kick off the holiday weekend as the City of Lawrence hosts the inaugural Wingin’ It With Our First Responders at 6 p.m. July 1 outside the Theater at the Fort, 8920 Otis Ave.

The wing-eating contest event will raise money for the Susan B. Jordan Memorial Fund through the Lawrence Township Foundation, in memory of the Amy Beverland Elementary School principal killed during a school bus accident at the school earlier this year.

“We’re going to have four firefighters and four police officers on each team with our fire and police chiefs anchoring,” Lawrence Mayor Steve Collier said. “It’ll be 12 wings per each competitor, six blazing and six mango habanero from our sponsor, Buffalo Wild Wings. Those are the two hottest.”

Police Chief David Hofmann and Fire Chief Dino Batalis have each hand-picked their departments’ representatives for the contest. The winners will inherit a traveling trophy and all-important bragging rights.

“We see this event continuing and growing each year,” Collier said.

Following the Wingin’ It event, the Heartland Big Band is presenting its “Let Freedom Swing” concert inside the Theater at the Fort at 7 p.m. The 18-piece band has performed once previously at the Lawrence theater.

“Our first concert there was very successful and very well received, and now our second one there is going to be a patriotic concert appropriate for the Fourth of July weekend,” Heartland Big Band Artistic Director Scott Lutterman said. “The show has some very familiar patriotic tunes and some World War II-era songs as well … We’re thrilled to tie in with the Wingin’ It event to support the community and provide some good music in return.”

Musical selections in the band’s planned lineup include “Boogie Woogie Bugle Boy,” “I’ll Be Seeing You,” “Stars and Stripes Forever,” “America the Beautiful,” “When Johnny Comes Swingin’ Home” and more.

For more, or to purchase $19 tickets ($12 for students and military), visit HeartlandBigBand.org.

A car show featuring 20 to 30 automobiles will run from 10 a.m. to 4 p.m., the Lawrence Lions Club will begin its daylong fish fry at 11 a.m. and will be joined by other food vendors, live music, all-star youth baseball games and a kids zone designed for children, giving families plenty to do throughout the day before the fireworks display begins at approximately 10 p.m. 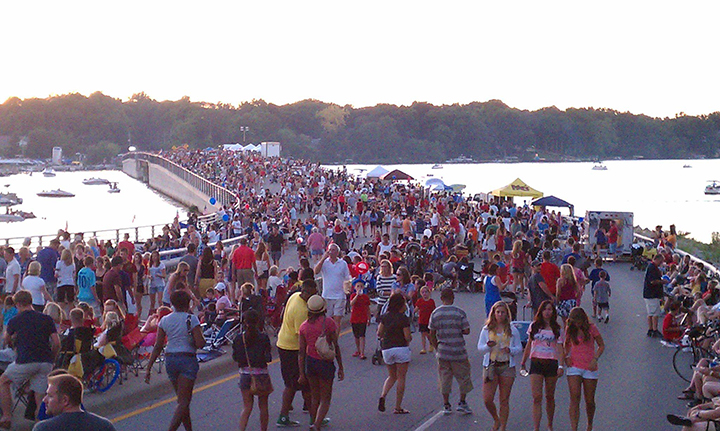 Event officials expect between 12,000 and 15,000 residents to descend on the Fall Creek Road bridge over Geist Reservoir for Blast on the Bridge. (File photos)

Another area tradition, Blast on the Bridge, offers residents a unique opportunity for fun, food and fireworks.

The Fall Creek Road bridge over Geist Reservoir will be closed to traffic at approximately 4 p.m. July 4, with Blast on the Bridge beginning at 6 p.m. and fireworks scheduled for dusk near 10 p.m. The event has drawn a crowd of nearly 15,000 in years past. 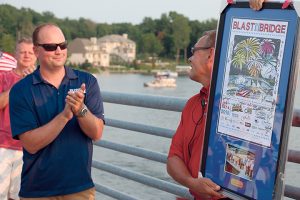 Fishers Mayor Scott Fadness presents an award to Geist Lake Coalition President Brian Hall for his work with the organization, which uses Blast on the Bridge as a fundraiser for its reservoir water cleanup initiatives.

“Blast on the Bridge is a really, really unique event at a unique location. You just don’t get to see fireworks over the lake too often,” Fishers Director of Parks and Recreation Tony Elliott said. “There are different places around the Fall Creek bridge where people can park, and it creates a really unique journey to the bridge as families all walk toward the reservoir. There are a number of different food vendors from restaurants and one of the major sponsors this year is Michelob Ultra through Terrance Smith Distributing, so people have an opportunity to grab a beer and hang out on the bridge. People can take their own food and non-alcoholic drinks and it’s a really cool walk as you go out there. It’s a unique opportunity to set up on the bridge over the reservoir, and it’s just kind of a hang-out festival atmosphere.”

The event also serves as a fundraiser for the Geist Lake Coalition, which uses the funds raised to support their reservoir water cleanup projects.

“They want to preserve the environmental quality and the health of Geist Reservoir, so the money they raise goes toward different cleanup efforts or dredging projects,” Elliott said. “This summer they’re working on some projects up the creek that feeds into the reservoir and they’ve done some work out there with some bank stabilization. They just try to preserve that environmental health and quality at Geist so people can continue to boat and swim and enjoy the reservoir for years to come.”