You are at:Home»Current in Carmel»Carmelfest 2016: Krauter no stranger to CarmelFest talent show 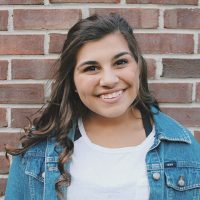 Courtney Krauter has already had one moment of glory in CarmelFest Has Talent.

Krauter, then a Carmel Middle School student, captured the 12-and-under division when she was 12 years old.

“It was insane,” said Krauter, who sang Barbra Streisand’s “Don’t Rain on My Parade.”

When she was eligible for the 13 to 17 age group, she entered twice but wasn’t selected, so she skipped it until this year.

“I was ill-prepared, because I hadn’t practiced my song a lot,” said Krauter, who lives in Carmel and will be Herron High School senior. “I listened to the other girls singing, and they were awesome. So I was going in there a little nervous. I was shocked when I made the top five. I was really proud of myself.”

Krauter, 17, sang “Cups” (“When I’m Gone”) during the audition, but isn’t sure what she will sing in the semifinals July 3. The top three advance to the July 4 final. Krauter, who describes her singing style as a belter, has performed in musicals for Civic Theatre’s Youth Artists Program and Summer Stock Stage.

Alexandria Boaz, who moved to Carmel with her parents in December, earned a semifinal spot in the 18-and-older category.

“The reason I am competing in the CarmelFest is because my dad told me about the opportunity, and I decided to seize it,” Boaz said. “I also thought it would be really cool to perform on the Fourth of July.”

Boaz, who will be a Middle Tennessee State sophomore this fall after transferring from Illinois State, has performed the national anthem at several sporting events, including a University of Illinois men’s basketball game and a Chicago White Sox game.