You are at:Home»Current in Carmel»Carmel Community»Carmel police search for suspect who robbed gas station at gunpoint 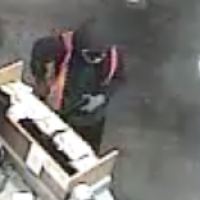 Police are searching for a suspect who allegedly robbed the Marathon gas station at 9800 N. Michigan Road at gunpoint. (Submitted photo)

Carmel police are searching for a man accused of robbing the Marathon gas station at 9800 N. Michigan Road at gunpoint on shortly after 1 a.m. June 25.

The suspect is described as a black male, approximately 5’9” and weighing 150 to 175 pounds. He was wearing a dark brown hoodie sweatshirt, black pants and shoes and had a cloth covering his face. He was also wearing what the clerk described as gold-framed women’s sunglasses and an orange construction safety vest.

Anyone with information on the incident is asked to contact the Carmel Police Dept. Investigations Division at 317-571-2511 or Crime Stoppers of Central Indiana at 317-262-8477.