You are at:Home»Current in Carmel»Carmel Community»Clinton speaks at U.S. Conference of Mayors in Indianapolis 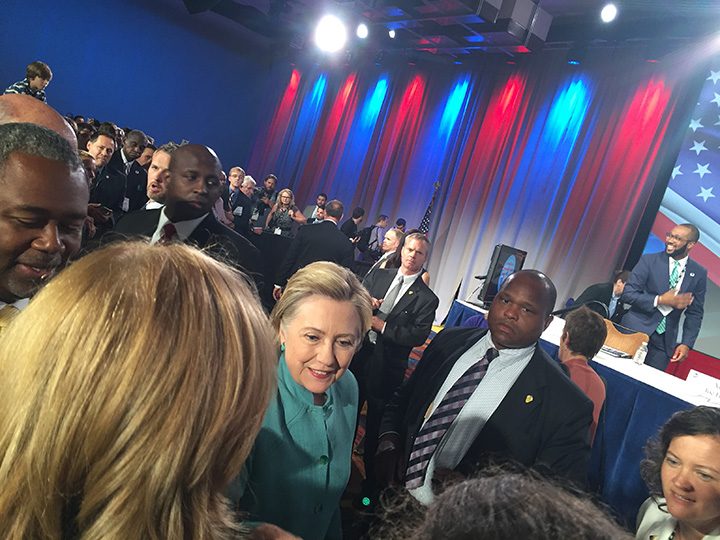 Hillary Clinton visited Indianapolis on June 26 to speak at the U.S. Conference of Mayors. (Photo by Adam Aasen)

Hillary Clinton was in Indianapolis on June 26, talking about Brexit, gun control and investing in public infrastructure.

Clinton, the presumptive democrat nominee for president, spoke to a packed crowd at the U.S. Conference of Mayors in the grand ballroom of the JW Marriott hotel.

The event was not open to the public but was broadcast by the media. Several Hamilton County leaders were in attendance, including Carmel Mayor Jim Brainard, who has met the former secretary of state in the past.

Orlando Mayor Buddy Dyer spoke immediately before Clinton, earning a standing ovation after telling the crowd how he dealt with the mass shooting at a gay night club in his city. Clinton recalled watching Dyer in those press conferences at the tragedy.

“I watched the mayor being very collected, being very clear about what was happening and what he knew,” she said. “The overriding message was to the city that he loves and serves is: persevere. Mayor Dyer please know that all of our hearts are with you and with the LGBT and Latino communities … It is time for us to come together to strengthen our gun laws and keep dangerous weapons out of the hands of dangerous people.”

Clinton addressed Brexit, the recent vote in the United Kingdom to leave the European Union. Clinton’s presumed opponent, republican Donald Trump, has praised the British people and said that Brexit could be a good thing for the economy, but Clinton pointed out the day after the vote the American people lost $100 billion from their 401K accounts. She stopped short of expressing disappointment with the vote but said it’s a reminder of how global events can have a huge impact on the United States.

“Our priority now is to protect American businesses … which is why steady leadership is important right now,” she said.

She took a shot at the ”bombastic” comments of a “presidential candidate on a Scottish golf course.” Trump was in Scotland after the vote visiting his Trump Turnberry course.

“We need leaders that understand our alliances and partnerships are more important than ever,” she said.

Clinton also spoke to the concerns of her audience of mayors and municipal leaders, namely investing in infrastructure and education. She laid out five priorities: creating the largest job investment bill ever, making college “debt-free” for all, making sure companies share profits with employees, making sure Wall Street pays its fair share and putting families first.

“I have this old fashioned belief that anyone willing to find a job should be able to provide for their family,” Clinton said.

Clinton also talked about creating a new national infrastructure bank and setting a goal that every household have broadband Internet by 2020 to eliminate the “digital divide.” She spoke about investing in public transit, fixing failing water systems and creating a clean energy electrical grid.

“Let’s set some goals again and hold ourselves accountable to them,” she said.

Clinton talked about the importance of education, saying that if a school isn’t good enough for her grandchildren, then it’s not good enough for anyone. She said many public schools meet that test, but she has seen some that are failing.

“Schools that are falling down, filled with mold,” she said, “Schools with no books in the library, which I actually saw.”

Clinton said she’ll achieve her goals through working with Republicans on bipartisan legislation.

“I know we can’t get big things done unless we work together,” she said. “I will also always listen. I think that is a lost art. I want to gather people together and figure out how to solve problems. That’s what I’ve always done.”