You are at:Home»Current in Carmel»Carmel Community»Carmel officials react to Dalai Lama, Lady Gaga speeches at U.S. Conference of Mayors 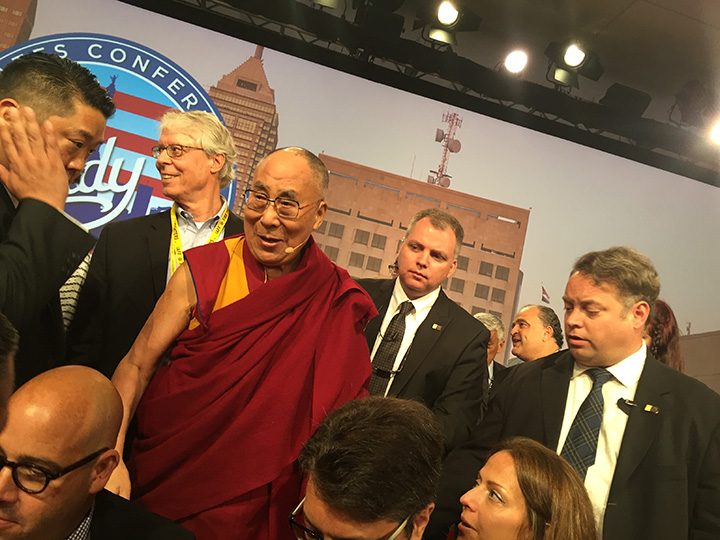 The Dalai Lama spoke at the U.S. Conference of Mayors on June 26 in Indianapolis. (Photo by Adam Aasen)

The 14th Dalai Lama took the stage with pop singer Lady Gaga and journalist Ann Curry on June 26 at the U.S. Conference of Mayors in Indianapolis to speak about compassion.

Several officials from Hamilton County were in attendance, including Carmel Mayor Jim Brainard, Noblesville City Councilor Chris Jensen and Nancy Heck, Carmel’s director of community relations and economic development. Brainard led a session on energy independence and climate protection in a nearby room immediately after the speech.

The packed crowd gathered in the grand ballroom of the J.W. Marriott hotel to hear Curry moderate a question and answer session on how the nation’s cities can promote kindness in their communities.

The Dalai Lama, the spiritual leader of Tibetan Buddhism, talked about how negative feelings and hatred can cause physical harm to the human body. He joked about Facebook likes, asking people if they use the “happy face” or the “angry face.”

He said education is the key to help teach people to see things from other people’s point of view.

“I always say the 20th century was a century of violence, but the 21st century should be a century of dialogue,” he said.

The Dalai Lama stressed the importance of considering all points of view.

“Even if something goes wrong, you won’t have any regrets,” he said.

Brainard said he was impressed by the Dalai Lama’s remarks.

“The Dalai Lama was wonderful,” he said. “You can see why he leads. He has patience, kindness, humor, compassion. He gave a great talk to the mayors. I think a lot of mayors are interested in this topic. He stressed the need of teaching young kids kindness. It can change the world. He stressed the importance of education. So many places in the world don’t have decent education results. They don’t have hope in their lives. We need to make sure everyone on the globe has the opportunity to a decent education.”

Lady Gaga’s remarks touched on the recent mass shooting in Orlando at a gay night club, an event that Gaga had previously spoken about tearfully in other public speeches. She said it’s important to reach the youth in U.S. cities through youth councils to teach kindness.

“When you are learning how to lead, you are supposed to pay attention to history and what works and replicate it all over the country,” she said. “Everybody wants to live in a kind city, I promise you.”

In Carmel, youth programs include the Mayor’s Youth Council and the Hamilton Council Youth Assistance Program.

Gaga spoke about how inflammatory political rhetoric shouldn’t be answered with anger.

“You can’t fight fire with fire,” she said. “You just make more fire. Kindness is the water.”

Heck, who was in attendance with staff from the Carmel Mayor’s Office, said she found the speech to be “inspirational.”

“It’s such as simple concept, and it’s what we are all taught as a kid but so many people have forgotten,” she said. “We can build all the beautiful structures that we want, but if people don’t enjoy living in our city and feel like they belong there and would be missed if they left then we’re not building the right kind of city.”