You are at:Home»Current in Geist»Plan commission approves temporary ordinances for I-69 corridor 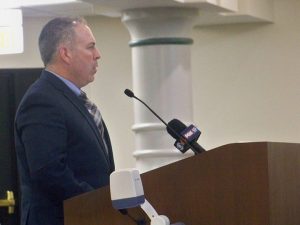 Director of Community Development Tony Bagato presents a pair of ordinances to the Fishers Plan Commission May 10. (Photo by Sam Elliott)

At its May 10 meeting, the Fishers Plan Commission unanimously issued favorable recommendations for a pair of temporary ordinances designed to help the city best develop along I-69 at 106th and 116th streets.

Upon approval by city council at its May 16 meeting, the ordinances will require any new development along I-69 at 106th and 116th streets go before the city council for approval regardless of the area’s underlying zoning — which hasn’t been updated in approximately 20 years.

“The city is experiencing a lot of development around 106th Street as well as 116th Street based on the current zoning that is outdated on back to the ’80s or inconsistent with each other as well the vision that the city is putting forward in the Fishers 2040 plan,” Director of Community Development Tony Bagato said. “To address these concerns, staff is recommending ordinances that would require a 120-day period for any properties in the ordinance to go through city council for approval just so that staff and the city council has the ability to review plans and encourage development that would be consistent with the comprehensive plan.”

According to a release from the city, the land along I-69 around 106th and 116th streets has been zoned broadly commercial since the mid-1980s with Planned Unit Developments that vary in architectural styles and permit building heights that range from two-story buildings up to the maximum height allowed by state law.

“It’s a fruit-salad of zoning that needs to be re-thought to provide a comprehensive look and unified goal for the overall corridor,” Mayor Scott Fadness stated. “We have one shot at getting this right.”

During the 120-day lifespan of the ordinances, the mayor, city council and city staff will work to address the area’s zoning conflicts, and during that time any proposed developments there would need to be approved by city council.

“Quite frankly, many of those zoning requirements are 20-plus years old and they were done prior to any of the expansion that’s going on,” City Councilor and Plan Commission member Pete Peterson said. “This is really an effort by the mayor, our council and the city to make sure that we continue to have that world-class development along a corridor which is probably one of the biggest assets that this city has and not let things occur maybe that would degredate the property there.”

Bagato said currently there are no development proposals already filed that would be affected by the ordinances, although it’s estimated one could arrive in June for a hotel off I-69.