You are at:Home»Current in Zionsville»Zionsville’s Palette offers a new space to create 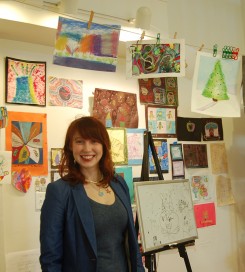 Rebecca Cisneros is the owner of Palette, formerly known as A Space to Create. (Photo by Heather Lusk)

As a part-time teacher at the art studio A Space to Create, Rebecca Cisneros had thought about owning it someday in the distant future. But when owner Jenny Tucker had an opportunity to teach full time and decided to sell the business, Cisneros had to make a speedy decision.

“I never thought of it as a reality that would be coming soon,” she said. “I threw myself at it really quickly.”

Wanting to pay homage to the original name but create something that is her own, Cisneros renamed the studio at 65 E. Cedar St. ‘Palette – it’s a space to create.’

“I want to build off of what Jenny already has going,” Cisneros said. But she has plans to put her own stamp on the business and try different things. She’d like to have specialists teach specific workshops and be a part of the community.

Palette will continue to offer classes to children along with adult workshops, summer camps and birthday parties. Her new website, ItsASpacetoCreate.com, has been updated with schedule information.

Carmel resident Cisneros grew up in Zionsville and taught art in local schools and art studios.

Tucker, who created A Space to Create in 2011, decided the time was right to pass on the business to someone else and return to her “first love” – teaching art.

“This summer, I started thinking about teaching full time in a school setting,” Tucker said. “I was thinking perhaps it was time to pass the business on to someone who was excited about growing it and taking on the challenge of running a business. I decided that I should follow my passion to teach art and let a more savvy entrepreneur tackle business ownership,” she said, and in January began teaching full time at Carmel Clay Middle School.