You are at:Home»Current in Carmel»February activities at The Barrington promote balanced living 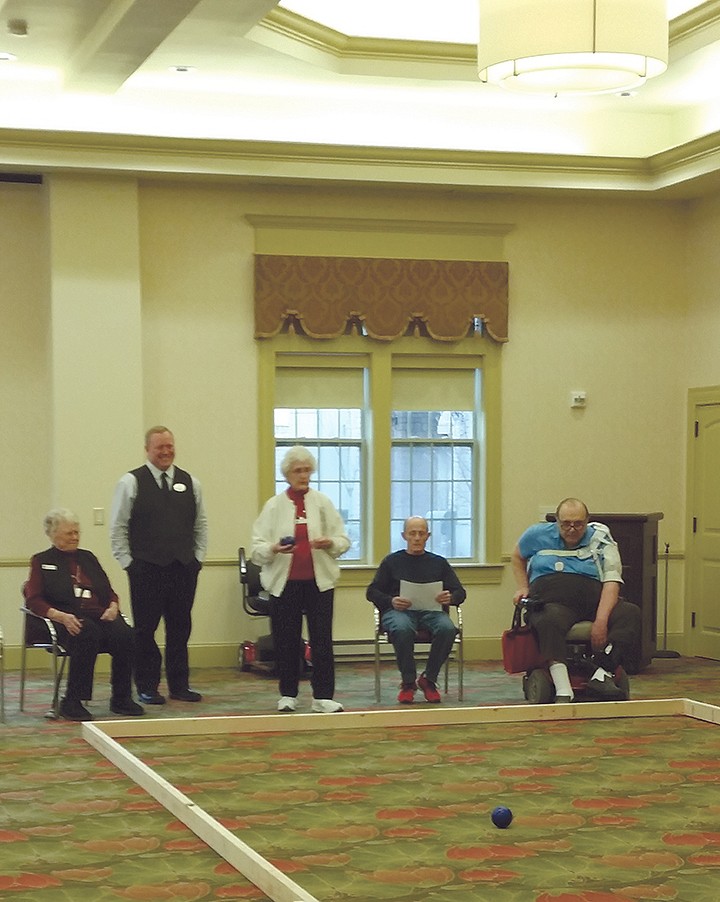 Residents at The Barrington of Carmel play bocce ball during their first week of Living It! The game allowed for those unable to stand to participate while sitting. (Submitted photo)

A team of seven residents and five staff members at The Barrington of Carmel are working together to create a healthy lifestyle for the senior residents in conjunction with Masterpiece Living, a Colorado-based organization. Living It! is a program designed to last through the month of February.

“We operate on the principal of you will age more successfully if you participate in four categories (of Masterpiece Living): social, intellectual, physical and spiritual,” said Sam Preissler, a resident of The Barrington who is involved with Masterpiece Living. “We continually have a group meeting that develops activities under the four categories.”

Preissler, along with Allison Krebsbach, fitness specialist with The Barrington of Carmel, with the rest of the team, came up with a calendar to help get The Barrington community more active.

“Masterpiece Living is a unique concept only at The Barrington,” Krebsbach said. “The premise for the challenge is to try four new activities a week in each of the four categories.”

The first week of February was focused on the physical category, and there were sports tournaments in shuffle board, bocce ball and pickle ball. Bocce ball was able to be completed while sitting down, so less able residents could participate.

For the social week, there were Super Bowl and Mardi Gras parties for residents to take part in, as well as men and women’s lunches.

“This is built upon extensive research by the Masterpiece Living organization that figures that people who are mature and those living in a community like we have need to be engaged and participate if they want to have a successful living experience,” Preissler said. “People living alone in homes or apartments don’t have these activities.”