You are at:Home»Current in Westfield»The Red Line approved for $75M grant 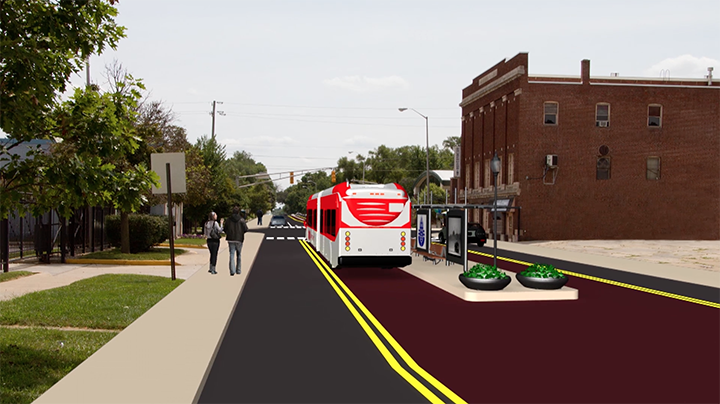 An image of what the Red Line may look like at the College Avenue station. (Submitted rendering)

As a part of the Federal Capital Improvements program, IndyGo’s Red Line transportation plan was selected under the small starts tier of the program to be a recipient of a $75 million grant.

After receiving a TIGER (Transportation Investment Generating Economic Recovery) grant for $2 million last year, the organization began engineering and environmental planning to allow for them to win a small starts grant.

Earlier this month, IndyGo was notified they would receive the grant.

“In October of this year, (Indiana) Congress will approve the budget, and that’s when we get pre-award authority and can start spending,” said Bryan Luellen, director of public affairs for IndyGo. “It’s a 35-mile line that would serve Westfield, Carmel and Indianapolis through downtown and then into Greenwood on the south side. This Phase 1 is a 13-mile segment from 66th Street in Broad Ripple to the University of Indianapolis.”

For the Red Line, stations will be spaced each half-mile. The transportation system is a fully electric bus rapid transit, which is the first of its kind in the nation. It would be a battery powered, all electric system. The entire project will cost $96.3 million.

“In this first phase, there will be one charging station, and the bus will charge in route to keep it going all day,” Luellen said. “It’s pretty innovative technology.”

Construction is not planned to begin until 2017, and Luellen said the bus will operate in dedicated lanes to not restrict the flow of traffic.

“By dedicating a lane and doing some reconfiguration of the streets, our goal was to not make traffic worse,” Luellen said. “We didn’t want to make that level of service worse.”

Phases 2 and 3 would build the line north and south, although Luellen said the project can’t be built into Hamilton Co. until there is a referendum to allow the transportation. With the Red Line continuing through Hamilton Co., Grand Park would be connected through Carmel and Indianapolis.

“The whole project is a really great project that can connect a lot of people to a lot of different job opportunities,” Luellen said. “This first phase is for the densest part of the city. As the project continues, we will be going back up to Hamilton County and doing more work on what Phases 2 and 3 are going to look like so people should stay tuned and attend the public meetings once we have those.”

2015 – Used the TIGER grant to begin construction, engineer and development plans; applied for the small starts tier of the Federal Capital Improvement program.

2016, Feb. 9 – IndyGo was notified they were approved for $75 million dollar grant to begin Phase 1, from 66th Street to the University of Indianapolis.

2016, October – Congress will approve the budget and IndyGo will be able to move forward.

2017 – Construction for the Red Line will begin.