You are at:Home»Current in Westfield»Nation seeks state Supreme Court post 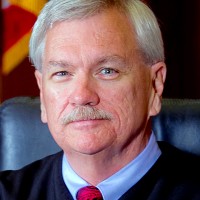 Steven R. Nation has served Hamilton Co. as a judge for Superior Court 1 since 1995.

The Noblesville resident now wants to expand that service to the entire state as he applied to be an Indiana Supreme Court judge, replacing Brent Dickson, who is retiring after 30-plus years in the position on April 29.

“I feel that I’ve shown here in Hamilton County that I love to serve,” Nation said. “This was a different way of serving not just the citizens of Hamilton County but the whole state of Indiana. The law touches so many different areas. I’ve always been interested in trying to make sure the system is accessible by the citizens and also they that receive justice while they are in the courts.

“This is just another opportunity that I can have an impact, not only here in Hamilton County but the state of Indiana.”

Nation, who is one of 30 applicants for the position, had a public interview with the Judicial Nomination Commission from 12:10 to 12:30 p.m. Feb. 19, the last of the 30 interviews scheduled.

The JNC then picks seven to nine candidates and holds a second round of interviews March 3 and 4. After deliberations in an executive session, the JNC will publicly vote to send the three most qualified candidates to Gov. Mike Pence, who has 60 days to select the state’s next justice.

“Judge Dickson is a very good man, and he has served with honor to the state of Indiana,” Nation said. “It would be an honor to follow in the court upon his retirement.”

This is the third time Nation, 65, has applied for a Supreme Court opening. Nation was one of the three finalists in 2012 when Gov. Mitch Daniels chose Loretta Rush, now the Chief Justice, for the position.

After the appointment by the governor, Supreme Court justices come up for a retention vote in the next general election. If retained, the term is 10 years. Every 10 years there is a retention vote.