You are at:Home»Current in Carmel»Carmel Community»Public input sought in planning 45 undeveloped acres in West Park 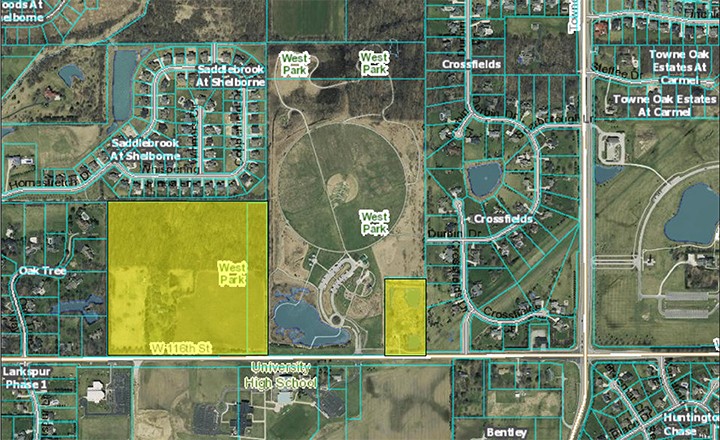 About 45 acres of West Park, highlighted on the map, is undeveloped. West Park, Carmel, IN
(Submitted photo)

Carmel Clay Parks and Recreation officials and consultants are developing a new master plan for West Park, the city’s only public park west of U.S. 31, and they are asking for feedback from residents and stakeholders to make sure they get it right.

“This has been something we have been hopeful to do for a couple years,” CCPR Chief Operating Officer Michael Klitzing said.

Development of the original 75 acres of West Park followed a master plan, developed in 1999. Additional land was added in 2003 and 2005, bringing the park to 120 acres with 45 acres undeveloped.

“As a designer, I am thrilled at the opportunity to add 45 acres to the park and knit it together as one cohesive and compelling vision,” said Gregg Calpino, a project manager from Short Elliott Hendrickson Inc. Tom Poulos from Williams Architects and Leon Younger from PROS CONSULTING, INC join him on the consulting team.

The first meeting was held Jan. 26. Topics discussed included the different types of play and what amenities pertain to trends in child development. Public feedback indicated an interest in traditional and natural playground features.

Additional meetings are scheduled from 6:30 to 8 p.m. on the third floor of the Meeting House, 2000 N. New Market St. During the meeting Feb. 23, the team will look at the ecology in the park, such as the wildlife habitat, constructed prairies and wooded areas.

“Our focus is to protect the natural areas we have out there instead of disturbing them,” Klitzing said.

The final meeting on March 22 will involve a discussion of programming and facilities that could be used year round. The park is required to make 80 percent of the money it is budgeted each year, and programs held each season help with that goal.

There will also be a three-day design workshop in May. The consulting team will work on creating an illustrative rendering of the master plan. The public will be able to observe and offer feedback throughout the process.

“This is a wonderful opportunity to listen to both new and long-established voices and develop the expanded park in ways that best serve this diverse population today and for decades to come,” Calpino said.

The master plan is estimated to take six to nine months for vision development with construction documents created by the end of 2016. Construction is expected to begin in early 2017 and last 12 to 18 months. The park is expected to remain open throughout the process.

For more about West Park or the master planning process, visit yourwestpark.com, or contact Michael Klitzing at mklitzing@carmelclayparks.com.