You are at:Home»Current in Zionsville»Former teacher Deenie Andrae creates art class at The Barrington 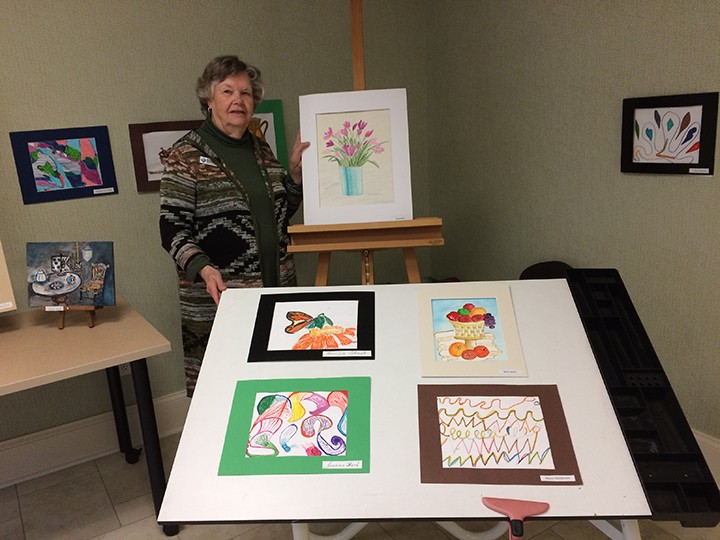 Former art teacher Deenie Andrae leads classes for her fellow residents at The Barrington of Carmel. (Photo by Mark Ambrogi)

For Deenie Andrae, it seemed natural to share her love of art with fellow residents of The Barrington of Carmel.

The former art teacher started holding an art class in June, meeting one night each week for an hour to 90 minutes.

“Coloring Isn’t Just for Kids” is the title of the class.

“I thought, ‘They are having all these coloring books on the market, but I think people can make their own designs and color them,’” Andrae said. “That’s how’s we started out.”

“After about of month of that, there were several that said (they) would like to paint,” she said. “So we got the paints out.”

Andrae, who lives in The Barrington with her husband John, said nearly 25 different residents have taken part in the class, approximately nine per session. Andrae said it has been mostly women.

“It’s been rewarding, and I think the people coming have enjoyed it,” Andrae said.

Andrae, 80, said she has brought some still life objects, like a bowl of fruit, for the residents to paint.

There is a variety of artwork on display from residents in the room.

“I think a lot of them were very pleased with what they were doing, and they had a feeling of satisfaction,” Andrae said. “They feel good about it, and they want to come back.”

Andrae said many of the residents had always wanted to explore their creative sides but didn’t have the time before.

Andrae and John lived in Zionsville for nearly 30 years before moving to The Barrington about 1 1/2 years ago. Her daughter, Michelle Golden, still lives in Zionsville. John is a retired Christian church minister.

“I’ve taught all grades,” said Andrae, who has a degree in art education from Illinois Wesleyan. “I’ve taught pre-school, and I was an adjunct professor at Phillips University in Oklahoma.”

She would teach regular classroom teachers how to teach art in their classrooms and taught three years in the Wayne Township school system in Indianapolis.