You are at:Home»Current in Carmel»Carmel Community»Project Trio expands on genres, story lines 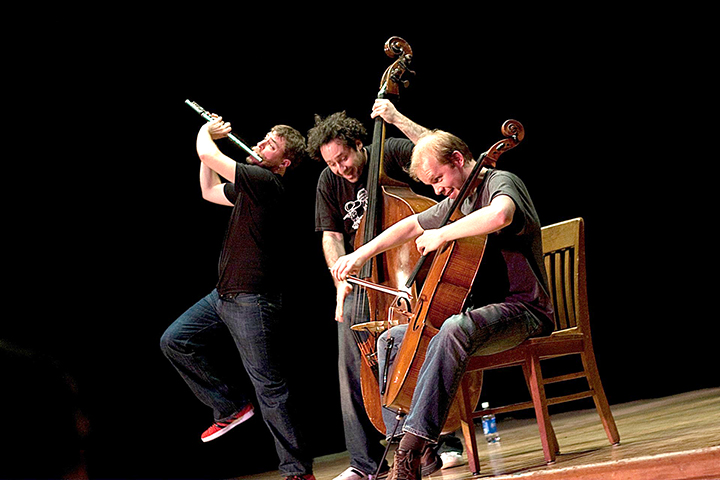 From left, Greg Pattillo, on the flute; Peter Seymour, on the double bass; and Eric Stephenson, on the cello. (Submitted photo)

“It’s very high energy chamber music,” explained flutist Greg Pattillo, whose “beat box” style of playing helped catapult the trio into international YouTube fame (see www.projectgtrio.com). “We’re just three guys who play the flute, the cello and the double bass, and we play those instruments to the max. We get everything out of them we can. So, get ready to rock.”

Project Trio is Pattillo on flute, Peter Seymour on double bass and Eric Stephenson on cello. Based in Brooklyn, N.Y., the three musicians were trained in classical music at the Cleveland Musical Institute and formed their trio in Boulder, Colo., in 2005.

Supported partially by an award from the National Endowment for the Arts, the trio is making a three-day residency at the Center for the Performing Arts. Its visit will include three public performances in The Studio at 7:30 p.m. Jan. 7 and 10 a.m. and 2 p.m. Jan. 9

The trio is dedicated to arts education, teaching the art and joy of jamming on classical instruments and opening minds to what instruments can do. They have performed and led workshops for more than 350,000 students on four continents.

Its visit here includes workshops for high school students at the Center and the music students at Hamilton Heights High School, plus performances at the Nicholson Performing Arts Academy at School No. 70 in Indianapolis and Hamilton Heights primary and elementary schools.

The musicians compose and arrange most of their own music, which they publish on their Harmonyville label. Their shows bridge the gap between classical and pop with pieces such as Rossini’s rapid-fire “William Tell Overture” to classical rock numbers like Jethro Tull’s cover of Bach’s “Bouree,” from Dave Brubeck’s “Blue Rondo a la Turk” to an original salsa composition, “The Bodego.”

“All three of us have very diverse influences,” said Pattillo.

The performances will carry a powerful anti-bullying message, including a performance of the classic story of “Peter & the Wolf,” albeit with a twist. Written by Russian composer Sergei Prokofiev in 1936, the children’s story is usually performed by an orchestra accompanied by a narrator. Project Trio had a different idea.

“We thought the piece would be great one to riff on,” said Pattillo. “Our version takes place in Brooklyn instead of Russia, and we turn all of the animals into people who are just hanging out with their friends. It gives us the chance to get closer to the audience.”

Project Trio, presented by The Scene

Where: The Studio, The Center for the Performing Arts

Tickets: $15, includes 45-minute concert and post-concert food. A cash bar will be available at 6:30 p.m. and after the concert, www.thecenterfortheperformingarts.org.

Project Trio: Peter and the Wolf