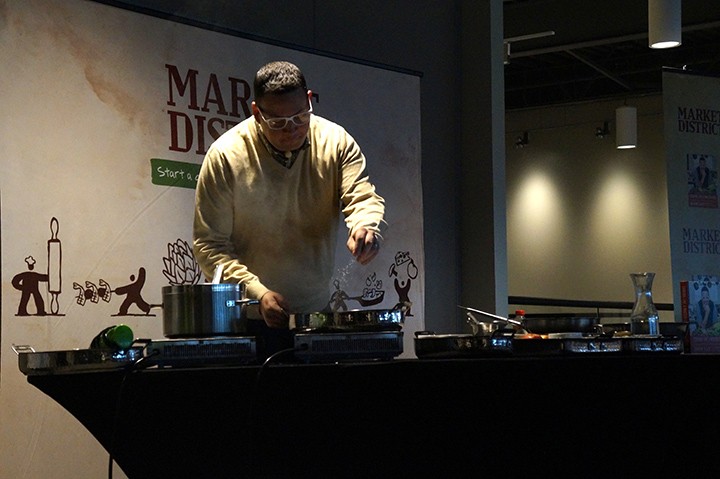 Chef Graham Elliot prepares a dish from his cookbook at Market District. (Photo by Audrey Bailey)

When it comes to cooking, Graham Elliot, chef, restaurateur, TV personality and now cookbook author, has a few words of wisdom.

For Elliot, cooking is more than a teaspoon of this and a half-ounce of that. He sees it as a means of both expression and reinvention.

The famous chef stopped by Market District in Carmel Dec. 4 to cook and sign copies of his new cookbook, “Cooking Like a Master Chef: 100 Recipes to Make the Everyday Extraordinary.”

“I’ve been cooking now for 21 years, so it was a long time in the making,” Elliot said before the event.

In Elliot’s two decades cooking, he’s managed to become a familiar face on TV and in the restaurant scene. He’s the co-host and judge on Fox Network’s cooking competition, MasterChef and MasterChef Jr., and has made guest appearances on The Today Show and Nightline.

At the event, Elliot prepared a risotto recipe from “Cooking like a MasterChef” and answered questions from the audience. Afterward, he stuck around to sign books and greet those who had come out to the store.

Elliot said his new cookbook showcases how accessible, creative and fun cooking can be. With this in mind, Elliot takes dishes people already know and adds his own touch.

“A lot of (the recipes) are inspired by classics: stroganoff, Caesar, iceberg wedge, risotto, but are done with my own spin,” Elliot said. “I love irony and humor, and I think it should come through food, as well. So, that’s the idea of the book.”

Cooking for Elliot is more than following a recipe or perfecting a technique. He believes it should be spontaneous, ever-changing and exciting.

“It’s not super difficult. It’s something that should be extremely fun,” Elliot said. “The more you approach it like that, it’s kind of like you become liberated.”