You are at:Home»Current in Westfield»Westfield students nominated for Spanish award 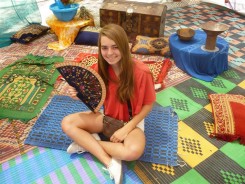 Elle McFarlane spent time in the Palacio de Cristal in Retiro Park in Madrid during her time in Spain. (Submitted photos)

Elle McFarlane and Taylor Knight were both recognized for their dedication in learning the language. After a recommendation letter from Jen Hasler-Troutman, WHS Spanish teacher, they were awarded the accomplishment.

“They suggest that students have volunteer work in the Spanish community, show dedication through Spanish or studied abroad, and I’ve done all of those things, and figured I had a chance and ended up getting it,” said McFarlane, who studied in Leon, Spain over the summer.

McFarlane also serves as a translator through her church, volunteered at Amigos de Westfield, and tutors other Spanish students. 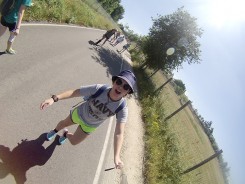 Taylor Knight participates in the Camino

Knight also studied in Leon, Spain, volunteered at Amigos de Westfield and tutors other students in the language.

Both girls are AP Spanish students in Hasler-Troutman’s class.

“I am proud of this award because for me it means that I have achieved more than I thought that I could, and that I am being recognized for my passion for the language,” Knight said. “I would just like to add that the Indiana Honors Program in Foreign Language, which is the program I studied abroad with, gave me the opportunity of a lifetime and that I am truly grateful for the chance I had to do something with my passion.”

Knight and McFarlane will be honored and presented with their awards at a ceremony Nov. 7.

“I want to be a doctor and have been told several times it’s good to speak another language, especially Spanish, in the medical career,” McFarlane said.

In addition to the girls receiving the awards, Hasler-Troutman will receive the Exceptional Teaching Impact and Motivation Award for Outstanding Spanish Teacher at the ceremony as well.