You are at:Home»Current in Zionsville»Boy celebrates third birthday by delivering donuts to Whitestown police officers and firefighters 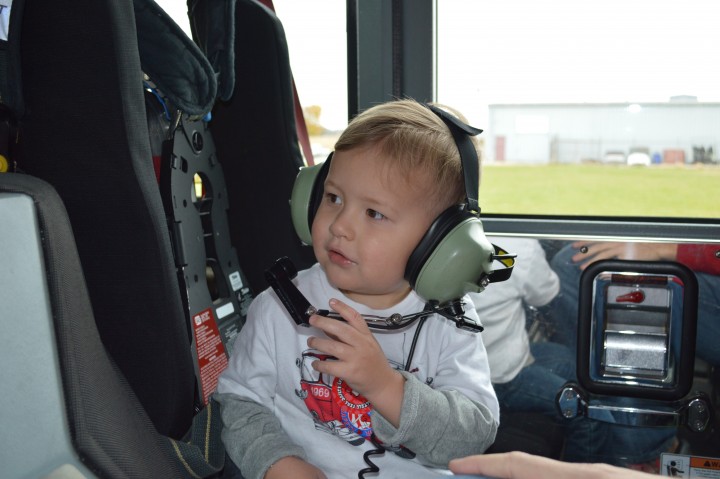 Carter Crouch, 3, enjoys the view from inside a fire truck to celebrate his third birthday. (submitted photo)

Carter Crouch had a birthday his parents expect he will be chattering about for quite some time.

He got to ride in a fire truck and then sit in the driver’s seat. It was his reward for bringing donuts to Whitestown police officers and the firefighters at Station 72 on his third birthday on Oct. 30. The idea to deliver donuts came from his parents, Jake and Devin Crouch

“Last year we had a drive to raise food for an animal shelter,” Jake said. “As Carter has gotten older, his interest in both the police and fire departments has grown. We want to instill in him the importance of giving back to the community and giving back to those that protect us.”

“The whole town of Whitestown and the police and fire department have been tremendous. It makes it easy to give back,” Jake added.

“Any time we see one on the road, he wants to follow them so he can watch them,” Jake said. “This was the highlight of his year. He’ll be talking about it for weeks to come.”

Whitestown Fire Department Chief Josh Westrich said it was a nice gesture by the Crouch family.

“It’s good to make a little kid’s day as well,” Westrich said. “He’s very into it. According to his parents, he loves seeing us around town. They stop to say hi and it makes his day.”

Westrich said the request to deliver donuts came to him through Dax Norton, Whitestown town manager.

“We figured it would be a good idea to one-up it a little and go pick him up on a fire truck and help him deliver donuts to the public safety team,” Westrich said.