You are at:Home»Current in Zionsville»Join the rhythm at the drum circle 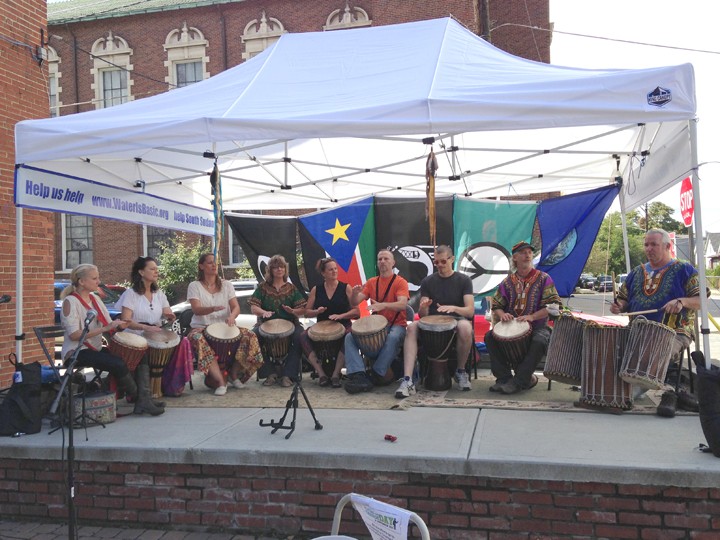 The troupe recently performed on behalf of Playing for Change. (Submitted photo)

One member of the circle starts the beat, then the others quickly follow the rhythm.

Some stray from the initial beat, layering the music and coordinating the rhythm as it flows together into a mesmerizing song.

Welcome to the drum circle, a free experience open to the public, meeting the second Sunday of each month at the Sullivan Munce Cultural Center. All ages and levels of musical aptitude are welcome to bring their own drum or rent one for a small fee.

“The idea for this drum troupe came during Womendrum last fall, when several women from the area decided we wanted to continue playing together,” said Rita Horn, a Zionsville resident.

In January, Horn organized lessons with a local drummer for those who wanted to learn African-style drum rhythms.

“He teaches things that are really basic,” she said. “Then people who are advanced can lay more on top of it.”

After the lessons, a core group continued to meet twice a month privately and decided to open a monthly drum circle to the public following requests from others to join.

Men and women from Indianapolis and surrounding areas joined the troupe for the lessons including Bryan Kelley, who offered to facilitate the first community drum circle, a job that will rotate each month.

Another set of lessons is expected to take place this winter. Information will be available on the Zionsville African Style Drum Troupe Facebook page. Approximately two dozen people are generally present for the drum circle.

“We learned this phenomenal amount of material,” Horn said.

The group spent the summer rehearsing in order to perform and donate proceeds to Water is Basic, an organization finding sustainable water solutions in areas of Africa, where much of the troupe’s music originates.

“Life can seem like such serious business,” Horn said. “It’s good for people to get together and have fun.”