You are at:Home»Current in Westfield»New prison scanners offer increased protection 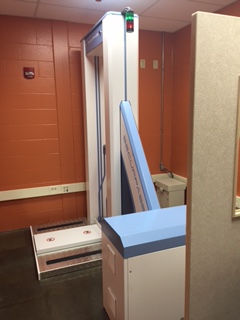 The machines are similar to what TSA agents use at airports but better according to Jail Commander Captain Jason Sloderbeck.

“This machine is actually an X-ray,” he said. “You get more radiation on an airplane flight than you do from these machines. It’s a very minimal dose. It gives us the ability to see in a body.”

The machines can see fillings in the teeth, surgical metal implants, weapons and even drugs hidden within the human body.

One reason for the change is a safety issue for jail staff and inmates. Weapons or items that can be made into weapons can be easily detected.

Prior to the machines arrival, anyone brought into the jail would be strip searched, which Solderbeck said doesn’t always lead to the detection of items hidden within the body. Even something as small as a cigarette being brought into the jail can pose a large problem, as they are considered currency inside the walls of the prison.

“We should be able to catch all contraband,” Sloderbeck said. “We scan everybody that is coming in or that has already been in the jail that has contact with the outside world.”

The other reason for the change is due to the growing drug epidemic. Around 90 percent of all inmates are affected by a drug or alcohol addiction. Many of them go to great lengths to hide illegal items within the body by swallowing bags of drugs or inserting needles within their body.

“Community Corrections desperately needed it because they have a huge amount of prisoners coming and going all day long,” Sloderbeck said. “So it’s easy for them to smuggle things in and out. Of course, we’re getting those prisoners back after they fail drug screens.”

Sloderbeck said with the capabilities of the new scanners, any attempt to smuggle contraband would be detected.