You are at:Home»Current in Westfield»NBA star signs on to Grand Park 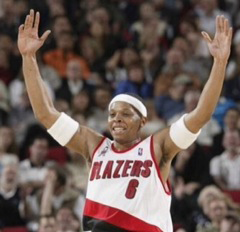 Grand Park Fieldhouse announced May 20 that former NBA star Bonzi Wells will be the new director of basketball operations.

“I was thrilled to get someone of Bonzi’s stature to head up basketball at GPFH. This really sets us apart from other facilities,” Rod Sinn, president of operations for Grand Park Fieldhouse said.

Wells, a Muncie native, was selected eleventh overall by the Detroit Pistons in the 1998 NBA Draft. He never played for the Pistons, as his draft rights were traded to the Portland Trailblazers for the Blazers’ 1999 first round pick. Wells played professionally for 11 years in the NBA (Portland Trailblazers, Memphis Grizzlies, Houston Rockets, Sacramento Kings and New Orleans Hornets-now Pelicans). He averaged a career high 17 PPG during his 2001-02 season with the Portland Trailblazers.

Before his professional career, he had a standout career at Muncie Central High School as he was runner up for Mr. Basketball and received a full scholarship to Ball State University where he played from 1994 to 1998. He was named the Mid-American Conference freshman of the year in the 1994-95 season.

“Having a former NBA star helping kids improve their game on a day to day basis is better than I could have imagined,” Sinn said. “Bonzi knows what it takes to play at the top level in college, and at the top level of the game, the NBA. What really impresses me the most, however, is Bonzi’s passion for helping kids on and off the court. This is another reason why GPFH is so blessed to have him on board.”

In 2004, Ball State retired his jersey, number 42, in recognition of his achievements.

Grand Park Fieldhouse is set to open in Jan. 2016.