You are at:Home»Current in Westfield»Westfield firefighter becomes PIO

Come July, Kyle Ericksen will have been a firefighter at Westfield for six years. He has also begun serving another position as well, as the new public information officer. 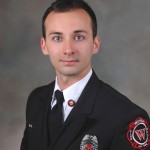 Joe Lyons, Westfield’s Fire Chief, was double-acting as the PIO when the position came available recently. Ericksen stepped up and offered to take the position. As PIO, Ericksen will cover all the major events, such as fires and large car accidents.

Ericksen studied marketing at IU, and after he spent several years in the business world with marketing and finance, he realized he was completely miserable.

“It wasn’t just a kid’s dream I was going to get over eventually, so I went after it,” Ericksen said about firefighting. He joined in 2009 with three others.

Ericksen will be working with Erin Murphy, the city’s media coordinator, filming public safety videos to put on Westfield’s Facebook page. He will be creating videos on the safe use of fire lanes, grill safety and illnesses and sicknesses. The videos will be season appropriate. Ericksen will also be controlling the department’s Twitter and Facebook accounts.

Ericksen said he is fortunate enough to not have a second job, and spends his time working on projects around the house, renovating and woodworking. He also enjoys traveling out west to hike the mountains and state parks. He is also part of the Westfield Firefighter Combat Challenge team.

Ericksen currently lives in Home Place, Ind., just south of Carmel. He grew up in Fishers and has been an active part of Hamilton County for most of his life.