You are at:Home»Current in Zionsville»Back on My Feet helps homeless find solid footing 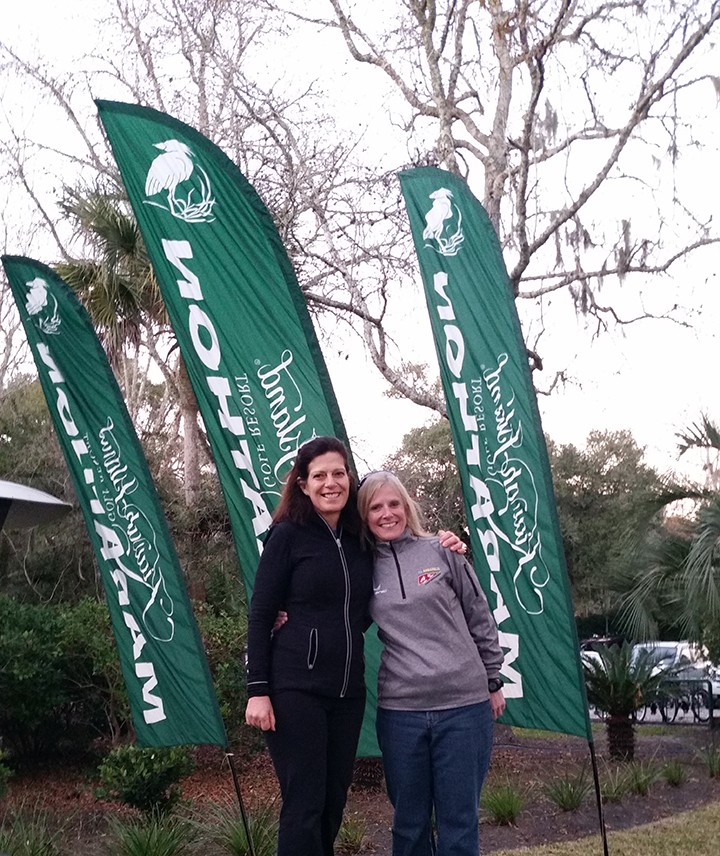 Back on My Feet volunteers Barb Shafer (left) and Janice Martin ran in a race on Kiawah Island, S.C., in December 2014.

A friend suggested Barb Shafer should check out volunteering for the Back on My Feet program.

“I did and I was hooked pretty much from the get-go,” Shafer said.

Back on My Feet is a non-profit organization that uses running to empower those who experience homelessness to make real changes in their lives in order to find employment and independent living. The organization recently announced a new partnership with the Runners Forum, an Indianapolis-based specialty endurance retailer. The Running Forum and Mizuno Shoes will donate fitting services and shoes at its downtown Indianapolis location to aid participants.

The Indianapolis Back on My Feet group began in March of 2011 and Shafer joined shortly thereafter. The volunteers are called non-residents and those receiving help are called residents.

“Basically when the residents join, they go through orientation and then they come out to the group run,” Shafer said.

Shafer, who lives near the Zionsville/Carmel border, is working with the Wheeler Mission Ministries group. Combined there are 35 resident members in the program. The groups meet on Monday, Wednesday and Friday at 5:45 a.m.

“Rain, sleet and snow we are there,” said Shafer, who participates once a week. “We meet unless it’s below 15 degrees or the roads are impassable.”

“They are running as a means not only to get in better shape but to be accountable and to have reason to get up in the morning and do something physical,” Shafer said. “They instantly have a group of people they can talk to about things. We have several corporations who work with us and will hire our people if they’ve been in the program for awhile.”

The program has classes to teach interview skills and financial planning. Shafer said several residents have graduated from the program and have found steady jobs. They can also qualify for grant money to buy a car or rent an apartment from the nonprofit.

“We see people that can go from being pretty down and out to feeling good about their lives and having a support system,” Shafer said.

Shafer describes running as “kind of my therapy.” She ran her first marathon in 2002.