You are at:Home»Current in Carmel»Carmel Community»Constitutional Patriots hold meet and greet for local candidates 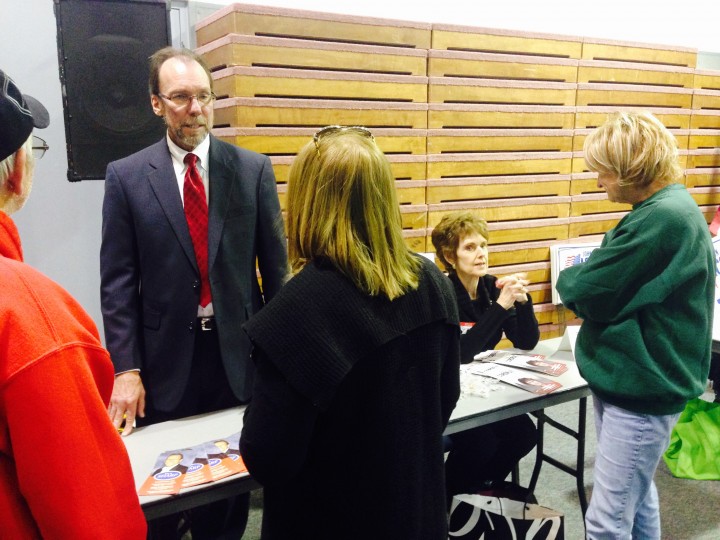 City council president Rick Sharp, who is running for mayor, left, and clerk-treasurer Diana Cordray, right, speak to members of the public. (Photo by Adam Aasen)

Earlier this month the Constitutional Patriots, a local conservative group aligned with the Tea Party, held a candidate meet and greet so interested voters could ask questions of those running in Carmel’s May election.

“We want the people to really know who they are electing for service on a personal level,” said Dwight Lile, co-founder of the group.

Candidates attended from all throughout Hamilton County. Those candidates from Carmel tended to include people who have been critical of Carmel Mayor Jim Brainard and his policies, such as city councilors Rick Sharp, Luci Snyder, Carol Schleif, and Eric Seidensticker, clerk-treasurer Diana Cordray and council hopeful Ron Houck. John Accetturo, an active member of the Constitutional Patriots and candidate for the council’s northeast district, was unable to attend because he had his appendix removed.

Sharp, who is running for mayor, said most voters asked him about his qualifications and what he would do differently.

Larry Carter, of Carmel, said he thought the candidates in attendance were, “really strong and pro-Republican.”

“We want to assure our taxes have a watchdog over them,” he said.

Ed Shaughnessy, resident of Carmel, said he came out to ask candidates about issues such as drainage, the city’s debt and the Carmel Redevelopment Commission.

“I learned a lot of things,” he said. “It was good to talk to everyone and now I’ll take some time to think about it all.”

Bob Wallace, an active member in the Constitutional Patriots, said he thinks voters should be asking candidates about the city’s overall level of debt.

“A certain group of candidates are using a sleight of hand with the numbers and so we just are looking for direct answers,” he said.

When it comes to that issue, Houck, a candidate for an at-large seat on the Carmel City Council, said he was happy to tell voters how he differs from at-large incumbents Ron Carter and Kevin “Woody” Rider.

“You are going to hear a lot of rhetoric during this campaign about debt,” he said. “Some people are trying to say we don’t have a debt problem, but the CRC had more debt than they could sustain and so they had to go to the council to get it refinanced.”

Who are the Constitutional Patriots?

It’s a local conservative watchdog group, not an official political party. Many of the members share ideals with Tea Party politicians. Hamilton County is its only chapter and the mission is to, “support sound fiscal policy and advance individual liberty and free markets.”