You are at:Home»Current in Zionsville»Famed vintage scooter up for auction at swap meet 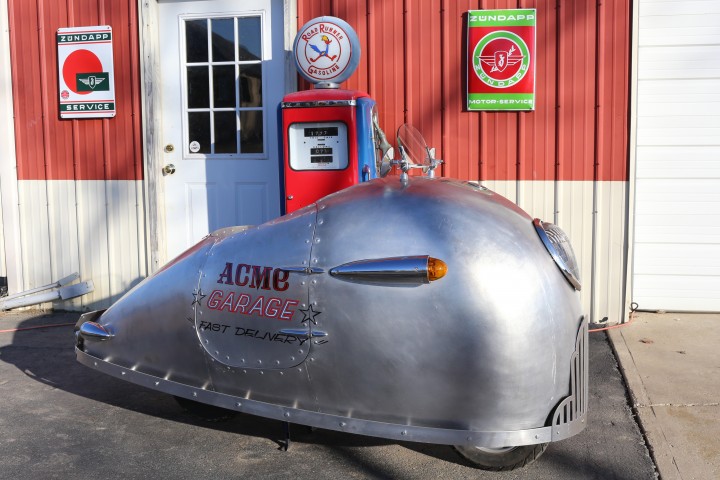 The Decopod Bi-pod is street legal and can reach speeds of about 60 mph. (Photo by Ann Marie Shambaugh)

It looks like something you’d see in the movies, and that’s not too far from the truth.

On March 8, an aluminum-clad scooter called a Decopod Bi-pod – the first of only four ever made – will go up for auction at the 2015 Vintage Motorcycle Swap Meet at the Boone County Fairgrounds. The famous bike was featured in an episode of Storage Wars, and two bikes in the series have been featured on Jay Leno’s Garage.

The auction is part of the 2015 Vintage Motorcycle Swap Meet, an annual event featuring vintage European and Japanese bikes, scooters and parts. Zionsville resident Rik Smits, organizer of the swap meet and former member of the Indiana Pacers, said that the event has been a big success since it began in 2012.

“We’ve had great turnouts for all the swap meets,” he said. “I’ve been able to sell a lot of bikes and a lot of parts, which is my main goal.”

The two-day event will feature vendors, food for sale and the opportunity for collectors from across the country to socialize and expand their collections by buying hard-to-find parts or placing a bid at the auction.

One of the other Decopod Bi-pods sold for $25,000 at auction, but Smits doesn’t expect the vintage scooter to go for that much this time around.

Randy Grubb, the Oregon artist who created the Decopod Bi-pod, said the one up for auction at the swap meet is the crudest of the bunch since it was the first. He created it as a favor for a friend who had helped him with another project.

“It’s an older bike that was languishing around, and it just turned into this art project,” Grubb said.  “Then another guy wanted one and I had to build more. Each one is unique and different. There are no two Decopods that are exactly alike.”

Cost: $7. Food will be available for purchase.