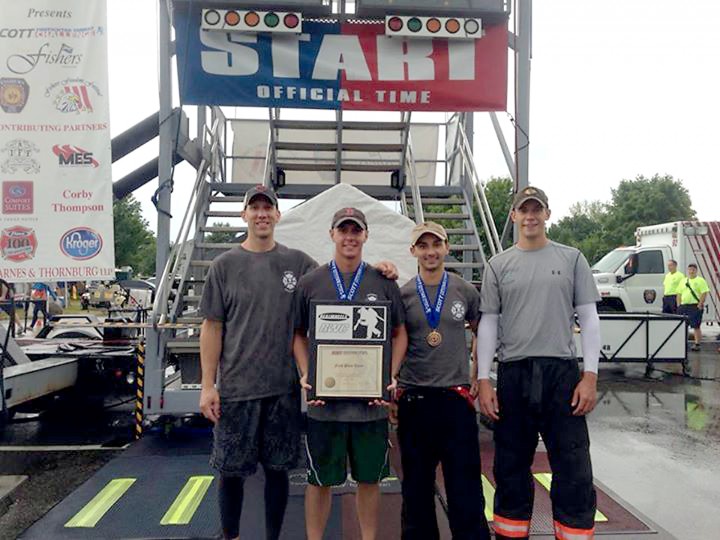 Four members of the Westfield Fire Department participated in the SCOTT Safety Firefighter Combat Challenge and took home second place in the nation.

Firefighters Matt Hansen, Justin Anderson, Kyle Ericksen and Jeremy Devitt traveled to Phoenix to participate in the World Championship where they placed 17th. In full bunker gear, including wearing the breathing apparatus, firefighters are timed on obstacles such as climbing a 5-story tower, dragging hoses and rescuing life-sized 175 lb. “victims” as they race against themselves, other teams from around the world and the clock.

“The members of the Westfield Fire Combat Challenge Team exemplify the best of the best in our field,” said Westfield Fire Chief Joe Lyons. “The team dedicates countless hours to prepare for one of the toughest physical challenges in the world. The Westfield team is already training for next year’s season.”

This year the Westfield team advanced to the finals. They placed 2nd in the Grand National Standings, 17th in the world and Westfield firefighter Matt Hansen set a state record.

Westfield firefighter Matt Hansen set a new state record with a time of 1 min 28.6 seconds and earned a special recognition.

“To achieve the Lion’s Den you must finish before a certain time (100 seconds),” Lyons said.

The team members also include Paul Ashby and Trevor Hash.

“They spend a lot of time training both on and off duty,” Lyons said, adding the team spends its own money on special turnout gear used for racing and travel expenses. “They take time off work and away from their families to get good press for the Westfield Fire Dept. and City of Westfield.”

This is the fourth year of competition for the Westfield team. Last year it placed fourth in nationals.