You are at:Home»Current in Carmel»Carmel Community»Carmel dulcimer player is one of a kind 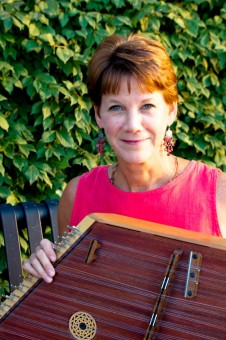 Many individuals looking to begin or expand their musical persona often consider the basic instruments such as piano, guitar, drums, violin, etc. Not too many look into or are even aware of the dulcimer. This rather rare instrument may look complex and impossible to learn, but one Carmel woman is making an effort to spread the word, or rather the sound, of this historic instrument.

Sharon O’Connell, a Carmel native, is determined to get her community intrigued in the dulcimer. Since 2002, O’Connell has been practicing both the hammered dulcimer and the mountain or Appalachian dulcimer, among several other instruments. She has performed at numerous shows including the Carmel International Arts Festival.

A former elementary school teacher, O’Connell uses her master’s degree in education to teach private music lessons specializing in the hammered and mountain dulcimer, penny whistle, guitar and flute. She teaches group lessons, workshops and even hosts jam sessions open to the public the first and third Monday of each month at 9611 N. College Ave.

“Myself and two other people have started an acoustic jam open to the public,” she explained. “It’s an ongoing jam where we’re catering to beginners and so people can learn how to play with other musicians because there’s a trick to it. I’ve had many of my students go to it.”

O’Connell’s passion for the dulcimer has led to her goal of developing a dulcimer community in Carmel by exposing the community to this not-so-familiar instrument.

“My dream is to get several people to play as a three-person unit or five and just take it out to the gazebo in Carmel or the farmers market,” she said. “We would start off with just doing impromptu public jams like playing before the Carmel gazebo concerts. Playing amidst all those people waiting to show the public that this exists, that there’s an instructor in the area, that there are people who can play this and this is what it sounds like.”

Aside from private lessons, O’Connell caters to weddings, banquets, funerals, festivals, school demonstrations and even plays public and private concerts in individuals’ homes. She also performs at assisted living facilities.

O’Connell is always looking for new students eager to learn or any local musicians willing to join for performances. She is also excited about the holidays approaching as Christmas music on a dulcimer is a whole new way to experience the melody.