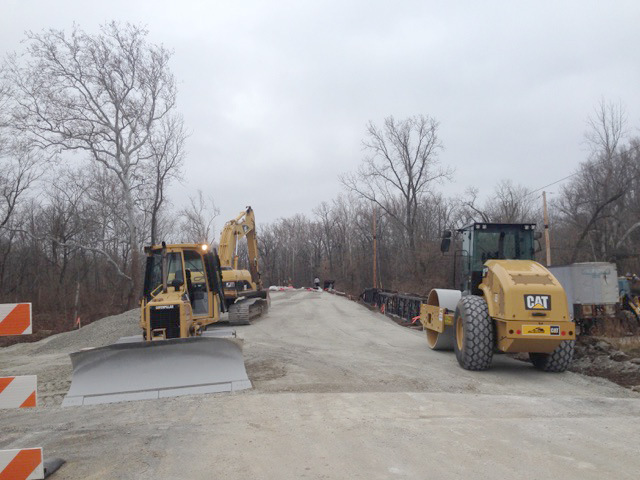 The Ford Road Bridge in Zionsville is still under construction, but is scheduled to open this week. (Photos by Christina Pappas)

The bridge located at the intersection of Ford Road and 96th Street has been the center of controversy for years, but that is all about to change.

The structure providing passage for people and vehicles to cross since 1920, was long established as a pleasant route with the “tunnel of trees.” It was reconstructed in 1971 and then in the mid-1990s, the controversies began when townspeople and county leaders were planning for another repair, and then a complete replacement of the structure.

“You don’t have enough room in your paper for all of the controversy,” stated Rick Carney, superintendent of Boone County Highway Department. “The short version is, in the beginning it was the bridge design [that was a problem.]”

Carney stated that then the problem was a controversy between replacing it with a steel truss bridge versus the new bridge ending up in new bridge design and wood railing.

Carney also stated that “people were upset for many reasons, one reason was cost, the second reason was inconvenience, and probably many more reasons.”

Original replacement plans for the steel historical-era truss bridge from another location in Indiana to be installed at the Ford Road site were squashed when Boone County Council leaders opposed the idea, citing bridge dimensions as the reason for the change.

As a result, the town lost more than $2 million in federal funding for the steel truss’ relocation into Zionsville.

The third installment in the bridge’s life has cost approximately $1.6 million according to Carney. In August, Yates Construction, Inc., won the contract to replace the bridge.

“Bridges are designed to carry traffic and this bridge was becoming unsafe; therefore, its reconstruction was required,” he said.

Some residents with concerns filed a petition on GoPetition.com in 2011. It read:

“In order to increase community safety, the 96th Street/Ford Road Bridge Project should include: moving the 96th intersection north away from the bridge; installing a new two lane bridge with generous shoulders; and widening and lessening the 90 degree turn.

We oppose the current bridge project as it does not accomplish these three objectives, and urge the Indiana Department of Transportation and Boone County Commissioners to consider other alternate bridge plans that do.”

Carney stated that all of these issues were considered and the new project did accomplish the three objectives outlined in the petition.

Now, construction on the bridge is nearly complete and a ribbon cutting ceremony is scheduled for 11 a.m., Dec. 5. It will be open to traffic immediately following the ceremony.

The more than 7,000 motorists who use the Ford Road Bridge have been taking detours along Oak Street or Moore Road while the project has been going on.