You are at:Home»Current in Westfield»Grand plans moving forward 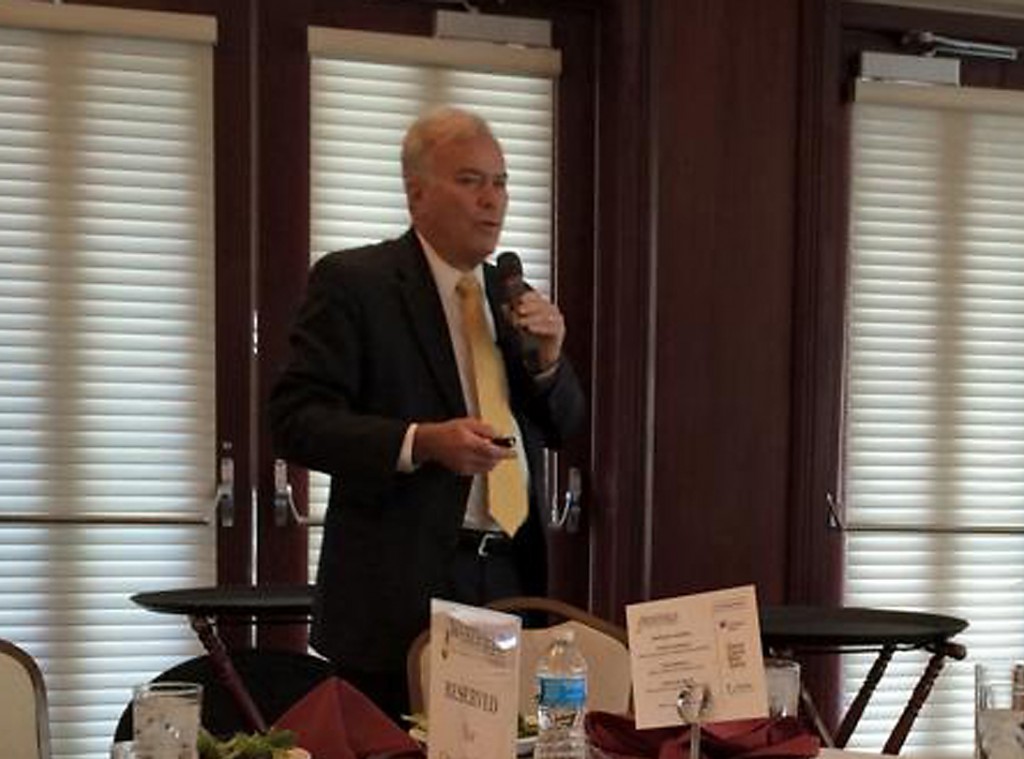 Mayor Andy Cook gives his annual State of the City address to the Westfield Chamber of Commerce on Nov. 20 at The Bridgewater Club. (Submitted photo)

“‘Hey Andy, I’m in my downtown and there are soccer jerseys all over this place, thank you very much,’” Cook recalled Brainard saying. “For now, Mayor Brainard, for now. We’ll see what we can do.”

Cook said he hopes to keep many of those visitors spending their money in Westfield in the future.

The city’s next mission is to create Grand Junction Park and Plaza, which will be a downtown destination for families and visitors. Cook gave his State of the City address at the Westfield Chamber of Commerce meeting at The Bridgewater Club on Nov. 20. Renderings of the proposed Grand Junction (including stores, restaurants, office space, interactive water park, ice skating rink) were revealed at the luncheon.

“We want to provide a unique safe environment for young families,” Cook said.

Cook said many families love the atmosphere of Broad Ripple or downtown Indianapolis, but want to move to places with good schools when their kids are about to start school. The biggest challenge Westfield faces is financial, Cook said.

“It’s easy to find money to build things,” Cook said after his address. “It’s very difficult to have the income it takes to sustain things. We got $44 million cash we received from the utilities sale. We’re using that to build our roads and our trails. I need to hire three more cops, but I can’t use that money because it’s finite. What we’re doing is using those funds to enhance our infrastructure that will entice property tax-paying businesses, so I can hire three more cops. It’s the best way I can sum up.”

Grand Park is definitely doing its part to help the economy.

“The reason we built Grand Park was to diversify our tax base,” Cook said. “In the nine months the park has been open, I think we are doing all right.”

The original projection was 300,000 visits to Grand Park in the first year. As of Cook’s address, there have been 906,796 visits and 26,186 hotel room nights sold. Cook said visitors are coming from all over. Grand Park had a soft opening in March and held its official opening June 20-22.

Cook said many visitors are international, which he learned when he talked to a visitor from Holland – the nation, not the city in Indiana.

“So if someone tells you they are from Peru, Versailles or Brazil, Mexico, you better ask because they might not be (from Indiana),” Cook said.

Cook also pointed out there were more than120 girls soccer teams at Grand Park during a November weekend.

“Did you ever think we’d have that many thousands of kids playing soccer and have the snow plows out the very same day?” Cook asked.

In October, it was announced that a 150-room hotel (Cambria Suites and Hotel) will be built on Grand Park’s campus. Westfield currently has just one hotel (Rodeway Inn & Suites). It was also announced that an indoor soccer facility will be built by Holladay Properties and will be open by Nov. 1, 2015.

Cook said he knows not everyone is on board with his vision.

“Like most towns and cities, there are some people that don’t like any change or risk,” Cook said.

Cook said the Spring Mill Station area was controversial at one time, adding the Kroger-anchored shooting center at 161st Street and Spring Mill Road has been quite successful.

Other highlights of the State of the City:

● Westfield High School recognized by U.S. News and World Report and The Washington Post as a top high school in Indiana and nation.