You are at:Home»Current in Westfield»Tennis game keeps Hayes young 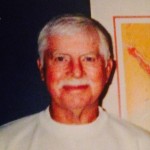 Sure, Jerald (J.B.) Hayes enjoys the competition of tennis. Even more, he loves what it does for his 78-year-old body.

“It keeps me in good health, that’s the most important thing,” Hayes said. “I love tennis and, boy, it keeps me in shape. I work out five or six days a week lifting weights, jogging and playing tennis two or three times a week. You should see the tennis players my age, they’re all in great health.”

Hayes, who was ranked as high as fifth earlier this year in the United States Tennis Association singles rankings for players 75 and older, represented the United States in his age group in the Super Seniors World Team Championships in Antalya, Turkey, which ended Sunday. Hayes, who plays out of Carmel Racquet Club, was the first alternate for the trip and didn’t find out he was going until two weeks before the tournament.

“A guy dropped out at the last minute and I backed into it,” Hayes said before leaving.

Hayes plays in a few age-group tournaments. In July, he was on the winning U.S. team in the Gordon Cup against Canada in London, Ontario. Hayes won one singles and one doubles match. He reached the quarterfinals in his age group in the National Grass Court Championships in August at South Orange, N.J., and placed third in that tournament in 2013. Hayes typically plays in several age-group tournaments per year.

Hayes, who grew up in Danville, started playing tennis at age 9, but his high school didn’t offer the sport. He tried out for the team at Purdue but quit after a few practices because he thought it would be too time-consuming with his academics. He said he didn’t play again for about 15 years. He then started playing in USTA age-group tournaments and then national tournaments at age 55.

“That was exciting for dad and mom,” Hayes said.

Eric left Carmel midway through his senior year and graduated from Nick Bollettieri’s renowned tennis academy. He later played for DePauw University. Hayes and his son, who lives in Memphis, have played in some national father-son tournaments.

“We finished fourth (in one tournament early) but then we didn’t do as well after that because there were younger dads,” Hayes said. “So I was sort of waiting until I get to be 80 and we’ll try again. But my son is busy at work and doesn’t get to play that much.”