You are at:Home»Current in Zionsville»Hipple warns parents at Zionsville Community High School 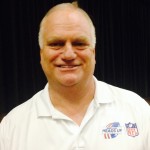 Ex-Detroit Lions quarterback Eric Hipple brings along video of the hardest hit he ever experienced on the football field. He never saw the Tampa Bay defender coming while scrambling for the sideline.

Hipple’s point is he was just as unprepared for the most devastating blow in his life when his son Jeff committed suicide at age 15 in 2000. Wracked with guilt for missing signs, Hipple’s life spiraled out of control. He turned to alcohol and eventually spent time in jail following a DUI.

Since regaining command of his life, Hipple, 57, now counsels others and gives talks on suicide prevention. He made a presentation to parents at Zionsville High School on Oct. 15.

“It was cathartic at first,” Hipple said of discussing his personal loss. “But now it’s more of a way of honoring his life and the fact that through his death a lot of information was gained. He was an organ donor and I see this now as a story donor.”

Hipple, who has worked as an outreach specialist at the University of Michigan Depression Center for 11 years, also works with military members who are experiencing a high rate of suicide in recent years. Hipple, who played nine seasons with the Lions, wrote a book “Real Men Do Cry” in 2009 about his own experiences with depression and surviving his son’s death. His daughter Tarah, now 21, joined her father in Zionsville to discuss the impact her brother’s suicide had on her. Tarah, then 7, was in the next room when her brother shot himself and felt the guilt for years.

Cathy Fuelling, director of unified student services for Zionsville Community Schools, said having speakers like Hipple is important for many reasons.

“The issue he talked about with mental fitness and the characteristics that he stressed that make children mentally healthy was important,” Fuelling said. “From early childhood, I think parents and schools should be helping children to be resilient and problem solve so they don’t get into the state of mind that will bring them to that severe depression (stage).”

The Zionsville community was rocked in April when a Zionsville Middle School eighth-grader committed suicide.

Amy Rexroth, a clinical psychologist and a consultant to the school district, said it is important that staff and parents watch for warning signs even before students reach their teen years.

“It’s important for the young kids, even as young as third or fourth grade to start hearing stress reduction strategies,” Rexroth said.

Rexroth said the pressures exist in all schools.

“The pressures are different but the pressure is there,” Rexroth said. “Being a middle school or high school kid is different than when we were kids.”