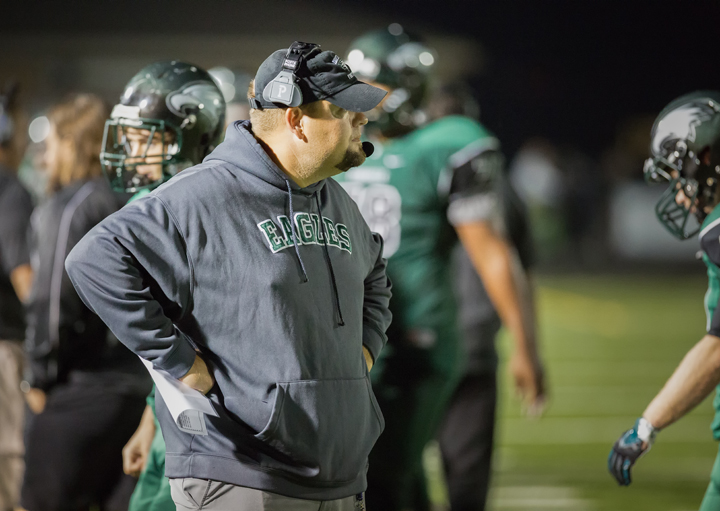 Replacing a successful coach after 18 seasons would seem to be an unenviable task.

Although the football team has struggled on the field this season, Zionsville High School football players have embraced Pat Echeverria, who replaced Larry McWhorter this season. McWhorter, who won a Class 3A state title in his first year at Zionsville in 1996 and led the team to a 3A runner-up spot in 2000, left Zionsville to start a football program at Covenant Christian High School.

Zionsville Athletic Director Greg Schellhase has been impressed with how the players have responded.

“Pat has done a great job of bringing a high level of energy and enthusiasm to the program,” Schellhase said. “The kids are excited about playing football. We have some kids out who haven’t been out in a few years.”

Zionsville offensive guard Josh Dunlop said he is certain he will be glad to say one day that he was here for Echeverria’s first season.

The 35-year-old Echeverria said he knew he was coming to a program with a great foundation.

“Coach McWhorter had been here a long time and had an unbelievable record over the years,” he said. “I’m not trying to fill anyone’s shoes. I have to do things my own way.

“The seniors have done a really nice job communicating with me the things they’ve liked in the past and the things they like that are new. It’s been a good transition. The administration has been amazing in getting everything I need as far as filling the coaching staff and equipment.”

Echeverria’s goal is to make football a fun experience for the players.

“I’m not the biggest rah-rah guy in the world,” Echeverria said. “Am I enthusiastic about the game? Yes. Do I want to have fun out on the football field? Yes. But really I try to count on more of my coaches to be more rah-rah. I want to enjoy what I’m doing and what the kids to enjoy what they’re doing. We’re not winning a lot of games right now but we’re on that right path.”

Echeverria has switched from the Eagles’ traditional I-formation offense under McWhorter to a spread offense attack similar to Oregon’s. The defense switched from a 4-3 formation to 3-4.

Senior linebacker Blake Kocher said McWhorter and Echeverria are great coaches and each has a coaching style that works.

“There’s definitely a lot more energy and things are a lot more positive,” Kocher said. “We have different practice routines and different weight room routines. The seniors had a lot of freedom of what we wanted to do and we kept a lot of the traditions we had with coach McWhorter.”

Echeverria spent the previous three seasons as Eastern Hancock coach, leading the Royals to 14-1 record and Class A state runner-up finish last season. Echeverria was an assistant coach at Pike, Perry Meridian and Cascade. He also was an assistant at DePauw University, where he played football.

Echeverria, a Pike High School graduate, and his wife, Valerie, have two children Makenzie, 13, and Addison, 9. They recently bought a house in Zionsville.

“It’s going to get my daughters ready for college and get them ready to accomplish the goals they want to accomplish in the future,” he said.

The football program’s future is bright, too, Schellhase said.

“We’re right on the cusp (of winning). We’re headed in the right direction,” he said. “(Echeverria) has connected well with the youth program and the middle school programs. He’s really taken ownership of the sport in the community. He’s done a lot in the short amount of time that he’s been here.”