You are at:Home»Current in Zionsville»New EDC director for Zionsville, Boone County 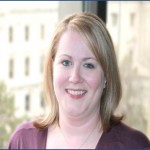 Whitehead has extensive experience in the fields of economic development and finance.  She has worked in the Indiana Office of Energy Development.  She was also formerly the strategic initiatives coordinator for Lt. Governor Becky Skillman.

“Molly’s experience in economic development, and love for Boone County made her a natural fit for the Executive Director Position,” said board president Eric Estes.  “We have no doubt Molly will continue the economic success of Boone County.”

Whitehead  grew up in Boone County, and graduated from Western Boone High School in 2001.  She got her bachelor’s degree from the University of Indianapolis in 2004, and her Masters in Business from Indiana Wesleyan University in 2011.

“Boone County has always been home,” said Whitehead.  “I look forward to continuing the success of what I feel, is the fastest growing, business-friendly county in the state.”

In her capacity as the executive director of the EDC, she will be responsible to continuing the prior success of the organization, while also working with the Boone EDC’s partners; including municipalities, utilities, private sector investors, companies and the general public.

A reception and open house to welcome her to the organization will be open to the public and will be announced in the near future.