Poetry on Brick Street is back for its August debut, with poet and author Joan Colby. 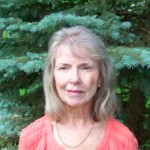 “I’ve been writing fiction and poetry since childhood,” Colby said.

Born in Chicago and raised in rural Illinois, Colby was first inspired by her upbringing in a 19th-century farmhouse.

“Living in a farmhouse built in 1874 creates a sensibility to those who lived here long before us. It also means a lot of maintenance. The countryside and the horses and other animals have provided a lot of material for poems,” she said, in a recent interview about her upcoming books with Flyover County Book Review.

Colby is the editor of Illinois Racing News, and to this day lives on a small horse farm in Illinois.

She has published 11 books including: “The Lonely Hearts Killers” and “How the Sky Begins to Fall” (Spoon River Press), “The Atrocity Book” (Lynx House Press) and “Dead Horses” and “Selected Poems” (FutureCycle Press). “Selected Poems” received the 2013 Future Cycle Prize. “Properties of Matter” was published this year by Aldrich Press (Kelsay Books).