You are at:Home»Current in Westfield»Frampton Estates project gets new life 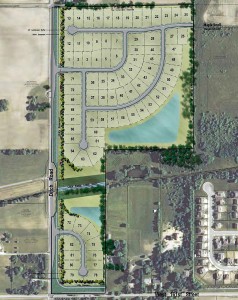 Grand Communities Ltd., also known as Fischer Homes, is looking to build a new addition on the west side of Westfield that was previously approved in 2006.

Attorney Steve Hardin of Faegre Baker Daniels, LLP said the 55 acres on the east side of Ditch Road between 161st and 166th streets is currently undeveloped and used for agriculture.

The property was rezoned from AG-SF1 and SF-2 to SF-3 with commitments in 2006. In 2006, a development plan and primary plat was approved for the Frampton Estates subdivision by Centex Homes. Since the 2006 rezoning and commitments were approved, there has been no construction activity and the project was revived by Fischer Homes this year.

Minor changes to the original approved plan were slightly relocating the 82 homes and the layout of the property, larger sized homes and upgraded building materials. Hardin said Fisher Homes plans to build residences in the $350,000 to $450,000 price range.

“We’ve significant upgraded the project from what was originally presented,” he said.

“A lot of places on Ditch Road are cookie cutter,” he told the Westfield Advisory Plan Commission. “I don’t believe residents are against development, we’re asking for you to speak up and provide something that makes this area a new gateway to Westfield. Add value to the residents and people nearby.”

Several neighbors also expressed concern that the original plan had a commitment that the southern area of the property would be used to create a City of Westfield park. Economic Development Director Matt Skelton said the parks department has reviewed the plans and the land is not needed at this time or part of the parks strategic plan.

“The land was already zoned in 2006. In my opinion, this is an improvement over what already exists. We can’t go back and change zoning unless the developer wishes,” said City Councilor Steve Hoover, who also serves as an APC member. “We’re limited in what we can do … Fischer Homes are a better product that what Centex provided in 2006.”