You are at:Home»Current in Fishers»Trains Offer Economic Boost to Fishers 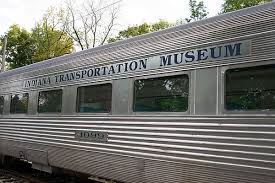 The Indiana Transportation Museum (ITM) has been providing train services since 1983, which is when the FairTrain first started running from Fishers to the Indiana State Fair. Since then, train rides in Fishers have become popular with several routes to choose from, like weekend daytime rides to and from Noblesville, Saturday night dining excursions to nearby small towns and various festival trains. What people may not realize is that the trains impart a sizeable economic boost to Fishers.

According to an ITM financial study, 28,600 people boarded the trains in downtown Fishers in 2013. 59 percent of those riders came from outside of Hamilton country while 16 percent came from Fishers.

“Direct spending by households boarding the train in Fishers amounted to over $493,000,” said John Johnson of the ITM. He went on to explain that the $493,000 was spent on food, fuel, retail items and lodging in the Fishers community.

The Fishers Fridays After Dark train is another ITM offering that provides additional economic opportunity. Running through July 25 (with no train on July 4), the train picks up riders at Steinmeier Station located just west of Binford Blvd. on 71st St. in Indianapolis. The route is designed to bring passengers from Indianapolis to the Friday night concerts in Fishers and allows time to visit shops and restaurants.

“The train is both a feature and a means to an end. People who share a ride on the train can choose the restaurant or event that suits their interests,” stated Johnson.

The popular FairTrain is set to start running from Fishers to the Indiana State Fair on Aug. 1.

“There will absolutely be a train to the State Fair,” Johnson said. “The FairTrain has run now for 31 years and it is worth pointing out what a truly remarkable operation it is. For the 17 days of the Fair, the railroad is a full-rail transit operation offering 20 trains a day on approximately hour-and-a-half intervals from 8 a.m. to midnight.”

From the many Fishers/Noblesville routes to the unique and enduring FairTrain, the ITM continues to provide transportation options that greatly benefit the Fishers community.

“The trains are intended as a kind of gateway experience for visitors, something to pique curiosity and excite imaginations, something to encourage people to investigate more on their own,” Johnson said.