You are at:Home»Current in Carmel»3 Carmel student filmmakers earn award for their documentary 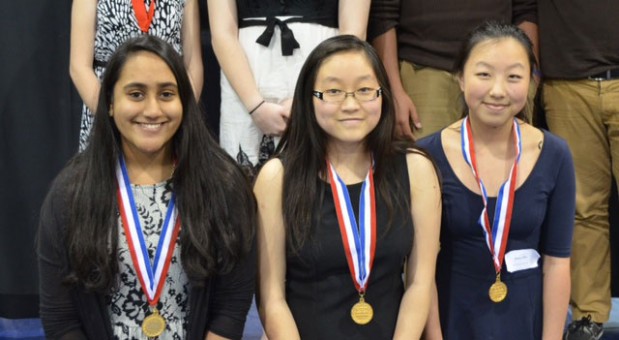 Carmel High School freshmen have been involved in creating history projects in Katie Kelly’s AP History class each year. And some of the participants even choose to submit their projects to the National History Day contest once completed.

This year, CHS students Jenny Zhao, Evelyn Shi and Bhavi Sarda competed and won first place in the state competition for an original documentary film they made.

The win means they’ll move on to the national competition June 15 through June 19 in Washington D.C.

“This is a competition where a bunch of students around the country make a project about a specific event in history according to the theme of the year,” Jenny said. “The theme this year was rights and responsibilities.”

That’s what prompted Jenny, Evelyn and Bhavi to focus on the 1-child policy in China as the topic of their project.

“Since the theme was rights and responsibilities we talked about the violation of human rights involved and the responsibility of the government to control the population,” Jenny said. “Me and Evelyn are both Chinese, so if our parents had stayed in China we would be affected. In the documentary we had an interview with Evelyn’s dad because his aunt was affected by this and had an abortion.”

It was clearly a topic the group could resonate with and it showed in the presentation of their project.

“One of the things that really impressed me about this group is how sophisticated their argument was,” Kelly said. “They took on a really tough topic of the 1-child policy in China. They looked at it with both positives and negatives, and I think that’s what the judges really liked.”

Besides the positive feedback that CHS teachers receive from the students each year and the success that comes to CHS through this competition, Kelly said that her students participate because of the value found in the learning the students experience along the journey.

“I hope they learn the value of digging deeply into a topic. I think even more than that, as freshmen, I really hope that they can see that they have the ability to do really high-quality awesome work. They can go out and find interviews and experts and don’t have to be spoon-fed this information,” Kelly said. “I hope that they start to explore different ways that they can make historical arguments.”

National History Day in Indiana has been organized for more than a decade by the Indiana Historical Society, and more than 4,200 Indiana students take part each year.