You are at:Home»Current in Zionsville»A couple conquering speeding 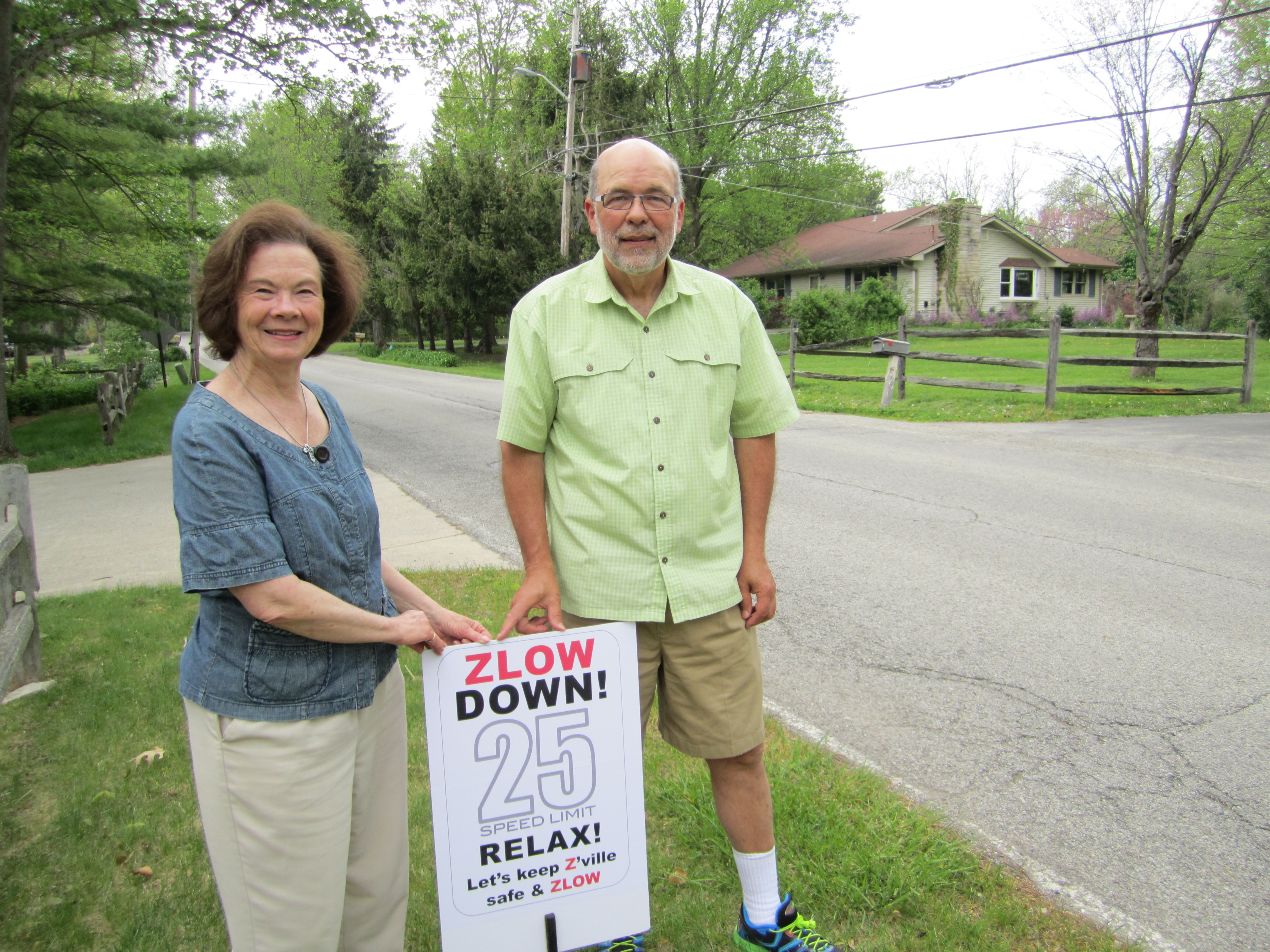 When Robert and Ann Clarke decided to move from Los Angeles, one of the main reasons they chose Zionsville was because it was a peaceful, quiet place “without the hustle of southern California.”

“There are probably thousands of ‘Zionsvilles’ across the U.S. but what is unique for us is that so many of our friends are close by and then there are the amenities of Indianapolis close by,” Robert said.

They settled in a bungalow in the village on Pine Street, but quickly realized speeding was an issue “because there aren’t a lot of stop signs at cross streets.” They eventually moved to their current home on Bloor Lane only to discover speeding was even more of a problem in their new neighborhood.

“It’s more widespread and a bigger issue on Bloor since so there is much school traffic,” Robert said. “I think we’re more sensitive to it because when we moved here it was to move away from that kind of thing. People on the freeway there are doing 85 or 90 and that is the norm. Zionsville wants to be a small town and speeding doesn’t support that image.”

So, on a cold morning last December, Robert – who was growing increasingly frustrated with the situation – considered putting up signs similar to ones he’d seen in other yards asking people to slow down.

“Then, it clicked in my in head to make it fun and a play on words and use a ‘z’ instead of ‘s’ in slow,” he said. “I wanted to make it about more than just sticking a bunch of signs up – rather more about communicating to the general public so they get a mindset that we don’t want speeding here. It doesn’t support what our community is all about and what we want our town to be known for.”

And, that’s how the Zlow Down Zionsville campaign was born. It utilizes everything from yard and merchant signs to t-shirts and brick street banners to convey the message the town doesn’t “condone” speeding. The Clarkes presented their ideas to the town council in March.

“Money is really tight and we aren’t looking for new things to spend money on,” said Zionsville Town Council President, Jeff Papa. “But I think their idea was they could get sponsors for the signs or the town or a nonprofit could purchase them and they could be sold to neighborhoods. They had clearly thought about it quite a bit and the council reaction was that it was an interesting idea but nothing to take concrete action on yet.”

Papa said that speed limits around town have been lowered over time, such as on Oak Street where the speed limit went from 55 to 50 at some points and down to 45 on other stretches because of hills and valleys that make it just “too dangerous.”

Many homeowners associations are also contemplating measures to try to deter speeding. Rich Tiller, president of the Oak Ridge Homeowners Assoc., said motorists cut through the neighborhood to get to Michigan Road.

“We have curbs and slightly hilly areas so the speed limit is 25 but we started getting complaints from neighbors about speeding issues – especially from families with kids,” Tiller said. “As the area around us has grown we’ve seen an increase in trucks and cars comings through. We even asked the police to patrol for speeding at certain times when we knew the highest traffic count was coming through.”

“It takes 10 to 15 minutes to write one so within minutes of writing one ticket they were off writing another ticket,” he said. “Most were doing 35 to 47 miles per hour in a 25 mile per hour zone so in our view that is a significant issue.”

He believes an awareness campaign like Zlow Down could help, but not necessarily totally solve the problem because there’s always a percentage of drivers who won’t slow down.

The Clarkes have talked to some business leaders as well and said response has been positive.

“This isn’t about brow beating but being positive and also fun,” Ann said. “And, it’s not just for speeding cars. We want to talk about the lifestyle and the atmosphere and have an enjoyable town. It just seems to be much more rushed than it used to be.”

Leigh Ann Akard with Akard True Value Hardware thinks Zlow Down Zionsville could be a clever way to “really make people think about slowing down in all areas of life.”

“From driving to working to playing – everything just seems to be happening so fast,” Akard said. “We are always in a rush to get everywhere and be everywhere all at the same time. We are in a constant state of high speed. I think Zlow Down is a reminder to enjoy the journey to get wherever you are going. If we are going too fast we are missing the small things that make the journey so much more enjoyable.”

The next step for the Clarkes is funding the program. They hope that will come in the form of donations, sales of signs and shirts, and program sponsorship from residents, business owners, and others. Any profit would be used to continue to promote the program and potentially help buy speed control equipment used by law enforcement.

But, more importantly, the couple said – they’re working on ways to keep the idea alive, including a website.

“We don’t want this to be a flash in the pan thing where you see it for a couple of weeks and then it’s gone,” Robert said. “The challenge will be keeping it fresh – whether it’s adjusting the marketing or coming up with fresh products.”

More information on the Zlow Down Zionsville program is available by emailing admin@zlowdown.com.