You are at:Home»Current in Carmel»Carmel Cover Stories»New Carmel sports league wants to focus on fun 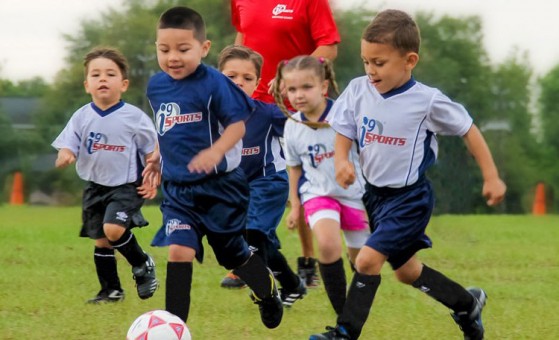 i9 Sports was formed as an alternative to the hyper-competitive, win-at-all-cost culture that pervades many sports programs. (Submitted photo)

Up until now, the best way for a boy or girl to play a team sport was primarily through their school or the Carmel Dads Club.

That’s about to change.

i9 Sports will soon enter the mix to provide another sports program that a parent and child can consider for playing basketball, flag football, baseball and soccer.

Among the fastest growing youth sports programs nationwide, i9 Sports will be opening new locations in Carmel and Avon under its 2014 expansion initiative with the goal of starting league play in the Fall.

Founded in 2003 and with 650,000 members in 28 states, i9 wants to expand its reach into Indiana. Participants typically range in age from 3 to 14, although some sports may accommodate older teens.

The “i9” in i9 Sports “literally stands for ‘I’ to the ninth power,” said President and Chief Operating Officer Brian Sanders.

Founder Frank Fiume said he wanted the company to be values-based and was struck by how many of the values he wanted to incorporate started with the letter ‘I.’

It’s clear why i9 Sports came into existence.

“When the company was created 10 years ago, we saw a gaping hole in youth sports,” Sanders said. “Parents said they were looking for an alternative to sports programs out there. When you boiled it all down, (parents) had 3 primary issues. One was the cutthroat level of competition that really set into most of youth sports programs had literally sucked the fun out of it.”

He said i9 Sports offers an alternative that delivers fun, safety, and convenience. But that doesn’t mean there’s a lack of competition.

“We believe in healthy competition. We think it’s important for kids to learn how to win with humility and lose with grace so we teach that. We (incorporate) winning and losing because that’s how life is. We refer to it as healthy, age-appropriate competition” Sanders said.

i9 Sports offers the convenience of having practices and games on the same day meaning that only one day is affected. In addition, i9 requires a signed “Parental Pledge” where they agree that the most important outcome of any game is for the child to have fun and to provide encouragement along the way. Negative or derogatory language toward officials, coaches or competitors is prohibited as this runs counter to the i9 Sports philosophy.

The company is also looking to hire two program managers and up to 40 employees. Interested candidates can e-mail resumes to resume@i9sportsfranchise.com.