You are at:Home»Current in Zionsville»The price of family 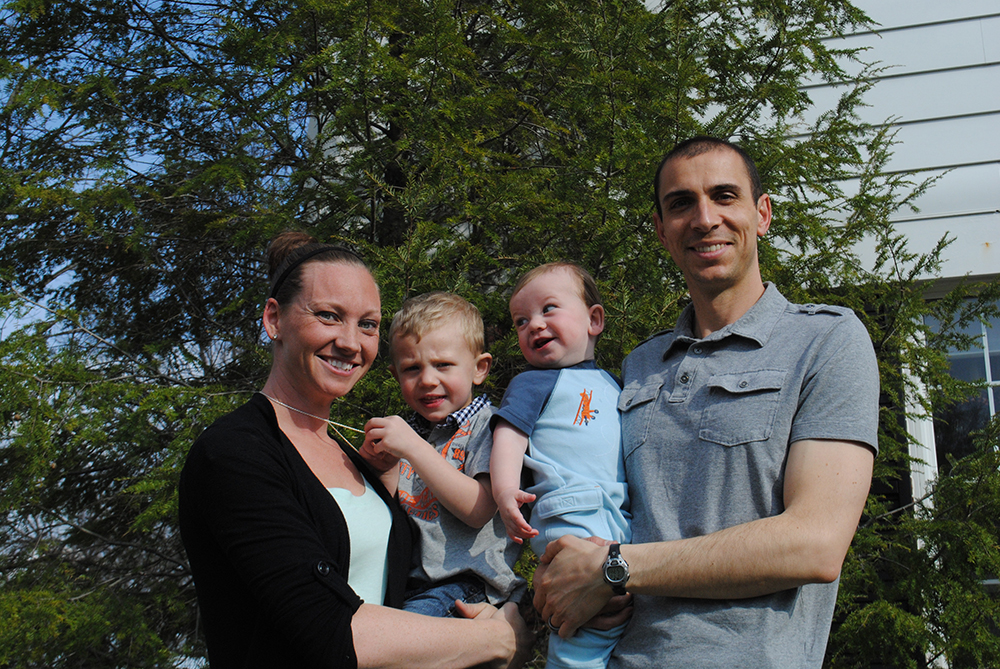 From left, Macara, Charlie, Harrison and Lenny Aloi became a family with the help of In vitro fertilization. (Staff photo)

Despite the costs, an increasing number of people are using scientific advances to help start a family

“I wanted kids since I was like 10,” says Macara Aloi.

The thought of a pregnant pre-teen is sure to give parents of young girls nightmares.

But Macara Aloi, 30, is just being honest. And things like a life-long desire for children tend to stand out more when you have to face the prospect that it might not happen.

Macara and her husband, Lenny, married in their mid twenties and immediately set about trying to start a family. But after six months with no results, they realized they were in for a long and painful journey.

All of Macara’s high school fiends all had multiple kids, and they just don’t get it, Lenny said.

“We were starting to tell our friends we were having trouble, and the next month they would announce they were pregnant,” Macara said.

Unsure about how to broach the subject, Macara said she often would tell people after she had a breakdown at a baby shower or birth announcement.

“Oh we just weren’t doing it right? Thanks,” she said she remembers thinking.

So during her pregnancy journey, Macara and Lenny decided to start some sort of support group.

“It’s amazing once you start talking about it how many people have these issues that you’re not aware of,” Lenny said.

And out of their support group, HOPE For Families, sprung the Family Building Fair. It’s a free event on April 24 at The Fountains in Carmel that aims to connect couples that are struggling to start a family with the information they need to know about fertility treatments or adoption.

The Alois’ path to children wasn’t clear cut, and many people who would like to become parents find themselves in similar situations.

The first doctor that the Alois approached did no testing and, in the end, got no results.

“He told us take some pills and you’ll be pregnant by the time we have to see you again in three months,” Macara said.

Lenny said he eventually had an independent semen analysis, and it came back terrible.

“Shortly after that we switched doctors,” Macara said.

A year into the process and at their second treatment facility it was recommended they try an intrauterine insemination procedure were the semen is inserted directly into the uterus using a catheter.

And that, too, failed to produce a pregnancy.

From what the couple know now they probably shouldn’t have even done it, Macara said.

Eventually Lenny underwent a procedure meant to mitigate some varicose veins that a specialist thought might be hindering his sperm.

But then they had to wait 6 more months to test whether the procedure had even made a difference.

‘We have no one to talk to’

But the stress was building. And as is common in marriages where infertility becomes an issue, blame and money had become issues of contention.

“At this point I’m like, ‘We can’t have a baby. We talk about it all the time. It’s so annoying. What are we gonna do?’” Lenny said.

“At this point we had been trying for two years,” Macara said. “And the reason we started HOPE For Families is because our marriage was not great. We were on completely different pages. I was ready to remortgage our house, and he was thinking sensibly.”

The couple were fighting and arguing and trying to figure out where to go, Lenny said

“I didn’t want to do IVF just then because I thought we had more time,” he said. ““If there’s any positive that comes out of this its that you’re older and in a better financial position once you decide what to do.”

“I hate to admit it now, but I brought up the D-word a lot when we were fighting,” Macara said. “And not seriously, it was more out of anger when we couldn’t agree on a way to move forward.

I don’t think the animosity would have gone away if we hadn’t gotten pregnant.”

Lenny said they went out drinking on an anniversary with some friends in the summer of 2010 at Muldoons.

“We were talking about our struggles and we were like, ‘Man, we have no one to talk to about this,’” he said.

‘They have great grandkids from it’

“At this point we were told, ‘You need to consider IVF because the numbers aren’t getting any better,’” Lenny said. “Then we found out it cost more than $12,000 and insurance won’t cover it and what if it doesn’t work?”

“Me, being the supporter of the family is like, ‘I don’t really feel comfortable doing that right now,’” he said.

And spurred by discussions, Lenny came across a clinical trial in New York for In vitro fertilization which sought couples who had tried everything up to IVF, but had not yet done IVF.

Lenny’s parents live in New York, which is what made it even feasible.

“So now there’s some hope. I don’t think we told my parents what was going on because IVF was kind of past their time,” he said.

“And they’re pretty strict Catholics,” Macara said. “But now they’re more OK with it because they have great grandkids from it, but they were not at the time.”

“They’re just unaware, because infertility is something that has gotten a lot more prevalent over the years. Back when they were having kids it really wasn’t a problem.”

The process was a success. They retrieved 16 eggs, 12 fertilized and on day 5 the couple had six that were still growing. They transferred two embryos and one took – that’s Charlie, now 2 years old.

They still had four frozen embryos, and went back to the same clinic later and transferred two more – they got Harrison, now 10 months.

The Alois said they’ll likely transfer the others this summer.

Macara did all the organizing work for HOPE for Families while she was in New York.

The nonprofit group originally had monthly meetings, and a lot of them have gone on to have babies, some people get divorced.

“That’s just the nature of it,” Lenny said. “People learn a lot in the meetings. A lot of the couples would only see one doctor because they were scared to leave. At the upcoming fair they can learn about different medications people have tried and what doctors people like and don’t like.”

Macara said that HOPE’s support groups were led by a licensed psychologist who didn’t let the meetings turn into a complaint-fest. Meetings are starting again at the Noblesville library. They had stopped for a while because most of the couples got pregnant.

This is a free event from 6 to 9 p.m. April 24 at The Fountains, 502 E. Carmel Dr. in Carmel, that will feature fertility doctors and adoption specialists. It also will have specialists in complementary and alternative medicine such as acupuncture, massage therapy and chiropractic care as well as information about financial resources from experience planning experts. There will also be three educational sessions on the topics of male-factor infertility, faith and fertility and a session for family members and friends of those struggling with infertility.

“I wanted to make sure people knew all of their options,” organizer Macara Aloi said.

She said the fair is paid for through fundraising and small fees to the vendors.