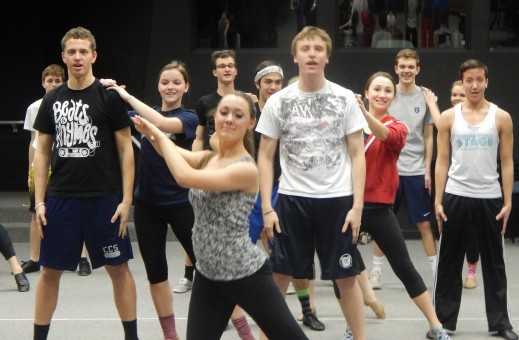 The costumes are designed, the plane tickets have been bought and the logistics are falling into place. The Carmel High School Ambassadors will be ambassadors in the truest sense of the word when they represent Carmel in Europe April 2 to 12.

But those of us who must remain stateside will still have a chance to see the show choir’s routine before it goes, when the group presents “An Evening with the Ambassadors” on March 14 and 15.

“We are working as hard and as fast as we can to get ready,” said director Lamonte Kuskye. “Not only are we playing catch-up after having lost about 20 hours of rehearsal time due to the weather, but we also just found out that they don’t use risers over there like we do, which means that Ron (Morgan, the group’s choreographer) had to re-stage many of the numbers.”

Fundraising has been a constant task since last year, in the form of a cabaret and silent auction, car wash and jam sales. The trip will cost $3,700 per student, and 48 students are in the group.

“I think we’re on target,” Kuskye said. “The parents have been very involved, and we’re so grateful for the grant from the township. It has really taken a village.”

“An Evening with the Ambassadors” will include a wide variety of numbers ranging from classical to pop, samba to swing and rock to Broadway. There will also be a salute to European travel, including a “Mary Poppins” medley and the famous French Can-Can.

“This is an incredible group of kids, and this will be the trip of a lifetime for them,” Kuskye said. “I took a similar trip in college, and it changed my life. They’ll get to meet other kids who share their passion. It’s not always just about competing — it’s about making dreams come true.”

An Evening with the Ambassadors ● Carmel High School Auditorium ● 7 p.m. March 14 and 15 ● Tickets start at $8 ● For more information visit www.totalgatesolutions.com