You are at:Home»Current in Zionsville»What will happen to the cats? 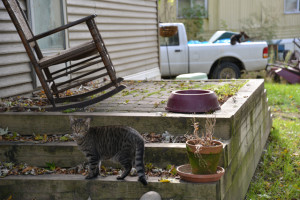 I don’t like cats. Let me clarify. I actually hate them and I don’t really hate anything. While babysitting as a teen years back, one hissed at me with back arched and claws out, and I have been spooked by them ever since. Throw in some itchy, watery eyes due to allergies and I really have no reason to like them at all.

However, my heart went out to a group of those furry creatures this week when I wandered around the Zionsville Adult Village mobile home park. Until this week’s cover story I didn’t know this mobile home park even existed. A mobile home park in Zionsville? Really? Actually there are three: Zionsville Adult Village, Zionsville Mobile Home Park, and Pine Ridge Mobile Home Park. Quietly tucked back along Fourth Street south of Hawthorne Street is a 16-lot park swarming with cats and kittens. As we wandered around talking to residents, we were being followed, rubbed against and at times swarmed in search of attention (and probably food).

One resident, Bonnie Sloan, became the caretaker of at least 10 cats. Sloan said she had her four “fixed” but there were several others, so the group continues to grow. My heart went out to her as we talked about the property where her trailer home sits possibly being sold and the ramifications for her and the other residents. Another resident who has lived there more than 10 years was also concerned about a possible move.

Then as I looked around my thoughts turned to those darned cats. Where would they go? Who would take care of them if Bonnie moved out? Maybe I do have a soft spot, especially for those baby balls of fur.

And my wandering continues…