You are at:Home»Current in Fishers»High schools pile on the pasta

For the second year in a row, Fishers High School and Hamilton Southeastern High School competed in a pasta drive benefitting those in need.

The contest, the @Meijer #PastaBowl2013, between the schools came to a close at the annual Mudsock Game, a big gridiron clash, though it will still continue at other high schools this fall. 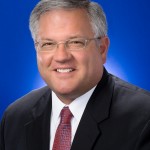 He said students have a lot going on during Mudsock Week.

“For them to take some of that time and energy and focus it toward bringing in pasta to help people less fortunate, I think, is very cool,” he said.

Some of the pasta will be distributed to local pantries at the Fall Creek and Delaware Township offices, Fishers United Methodist Church and St. Louis de Montfort Catholic Church, but most of it will be donated to Second Helpings, Inc., a nonprofit in Indianapolis that cooks up “rescued food,” doles it out to social service agencies and more.

Collaboration with the local pantries was new this year.

Fall Creek Township Trustee Jeff Hern said that a fraction of what was gathered – 200 pounds of pasta – could last the Fall Creek food pantry six to seven months, but an operation like Second Helpings would burn through it quickly. He also said that the local pantries help each other.

The pantry plans to participate again next year. He said he was tasked with getting HSEHS more involved to “hopefully outdo Fishers.”

Up for the grabs is a big trophy commemorating victory, which, of course, currently resides with FHS.

DeLucia said he hoped the contest would become part of Mudsock tradition with HSEHS hosting next year. The schools or whole community teaming up as opposed to competing is a possibility.