You are at:Home»Current in Carmel»Carmel Community»Former mayor still going strong 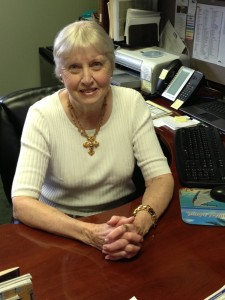 Jane Reiman, the first female mayor of Carmel, has a job as the advisor to the Carmel Mayor’s Youth Council and she is bursting with pride in her students.

Energetic, devoted, fun, organized, enthusiastic, very, very smart and team-oriented are the adjectives she uses to describe the 28 student council members between the ages of 13 and 19 who comprise the youth council.

“I am so impressed with these teenagers,” Reiman said. “I tell them, ‘You’re the future, we’re counting on you.’”

Five years ago when Reiman returned to Carmel after living in Corydon, Ind., to help care for her grandchildren, she offered her assistance to Mayor Jim Brainard should a job arise. Recently, Nancy Heck, Director of Community Relations for the City of Carmel, called and asked if she would like to be involved with the youth council.

Reiman’s response was, “I beg your pardon, what is that? I could be their grandmother. I would love to help out.”

Reiman, 80, describes her role as a helper to the group. The council’s sole focus is on volunteerism and serving the community, and it conducts weekly meetings at City Hall. It’s responsible for setting its agendas, electing officers and planning events.

Reiman sits quietly on the sidelines and marvels at the efficiency of the youth council’s meetings. The woman who once held the gavel and chaired hundreds of City meetings now responds to requests like, “Hey Mrs. Reiman, where can we get hay bales?”

Running errands and tracking down hay bales are not Reiman’s only duties to support the Council. Reiman believes it is critical that the council members understand how their city works, so she is taking the youth council members out of the board room by planning a series of outings to the fire department and police department, as well as the water and sewer companies.

“They can learn about government in class. I want them to see their government in action,” she said. “I would like to show them how the city operates. I tell them that taxpayers own the building they are meeting in and their parents paid for this pen.”