You are at:Home»Lifestyle»Blueprint For Improvement»New island opens up kitchen in remodel 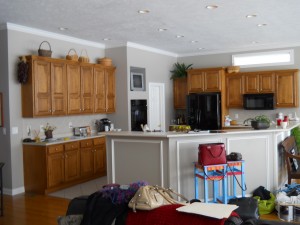 Existing Kitchen: Though they had lived there for less than a year, the third owners of this East Carmel home built in 2002 were ready for a kitchen remodel.

“The kitchen was original, and the appliances were not working well,” the homeowner stated. “The countertops needed to be replaced. The kitchen was the part of the house that needed the most work when we bought it.”

Open Floor Plan: The kitchen is truly the center of the home in this open-concept floor plan. The back wall of the home is mostly windows and overlooks Plum Creek golf course. Natural light abounds.

“Because the space is so open, our designer incorporated the style of our furniture and décor into the kitchen design,” the homeowner stated.

New Island Design: The original kitchen had a bi-level island that cut off the room visually. The new design called for one single level island top, which the homeowners were not sure about at first.

“The kitchen is so open, that we were worried the new design would make the space feel too big. Once it was installed, we were so happy we made that change. It brings all of the rooms together,” the homeowner stated. 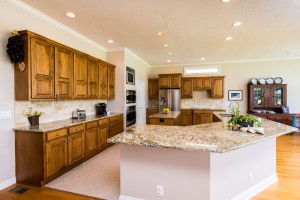 “The original backsplash was in a diamond pattern, and we wanted something more contemporary,” the homeowner stated. “The decorative tile above the cooktop is similar to a mosaic we saw while shopping for materials with our designer. We really like it.”

“I love the new oven. It can do so many types of cooking,” the homeowner stated. The counter-depth fridge opened up the work area compared to the old one that blocked the circulation in the kitchen.

“I love the way it all came together. I had a general idea of what I wanted. But it came out better than I imagined. Now I cook more than ever.”